Packing a lot into its price tag, the Jawa Outlander was a solid entrant to this year's CTOTY, and had our judges nodding in approval at its self-sufficiency and creature comforts. Ticking all the boxes for the typical forward fold design and then some, it boasts a sharp look, but more importantly, has a hot selling point of an easy set-up. With that making more time to relax at camp, that's got to be a bonus!

EQUIPPED WITH ALL YOU NEED

In this price bracket self-sufficiency is almost unheard of, so the Jawa Outlander was a breath of fresh air. Well a breath of dirty socks, and campfire stank accumulated over a solid week or two at a remote camp. Unless you’re sitting under the Simpson Desert sun, the average person needs at least two litres per day of drinking water. Luckily the Jawa Outlander comes equipped with 120L of food-grade water storage. There’s an additional 35L just for the shower. And if you like your campsite looking like a tacky Las Vegas Casino waterfall you can splash in another 40L of the wet stuff between the two 20L Jerry can holders. So water ain’t going to be an issue for a week or two trip. Power’s well taken care of too. There’s twin 100Ah AGM batteries for a total of 200Ah. Factor in a typical fridge sucking in around 2A per hour and you’re looking at two solid days of use before you need to start eyeing off the battery levels. Pick a nice sunny spot though and the 200W solar panel included should make it a non-issue. 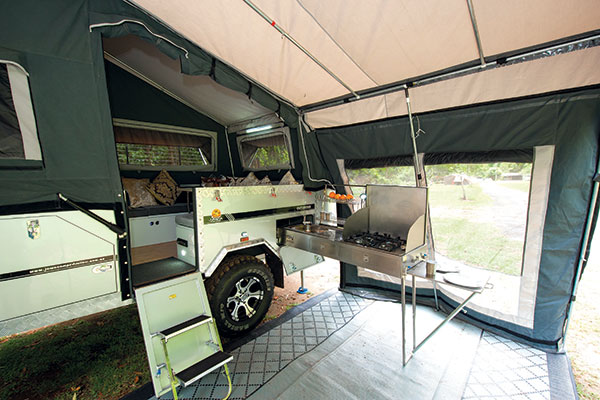 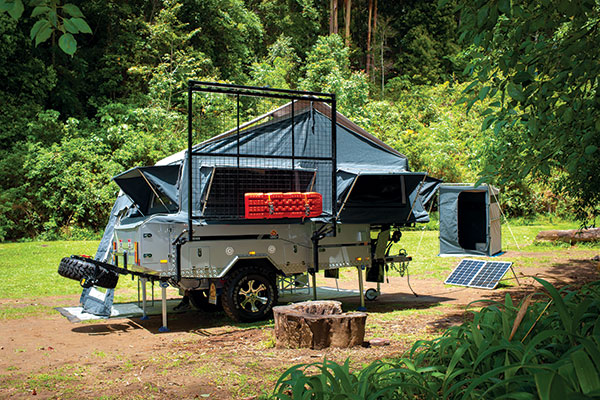 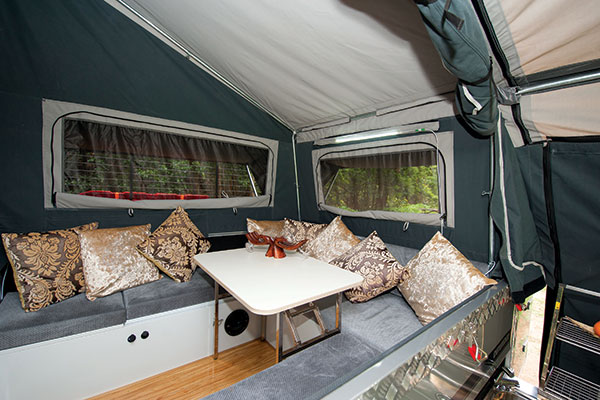 There’s room for 100L plus of fridge or freezer and reasonable amounts of storage for non-perishable food. The unique boot (for lack of a better word) increases storage, and therefore touring range even further. It’d be great to see the ability to pump water from a creek to the shower, but at this price you’re already getting a lot for your money.

The Jawa Outlander is a big, impressive forward fold camper that looks good behind any tow vehicle. Its deep body (quite correctly) implies good internal storage and plenty of room to live comfortably under canvas.

Jawa is a Queensland based company which has risen to success on the back of the rising quality of imported campers, matched with ready access to the increasingly popular forward fold format. The camper was a mix of standard inclusions – polyblock hitch, trailing arm independent suspension with 12in brakes, fold-up internal table, dual 100Ah AGM batteries – and higher end components – Ark XO jockey wheel, breakaway system, 40A mains charger, and EvaKool fridge.

With a Tare weight of 1470kg and a ball weight of 100kg, it was at the lighter end of forward fold design and construction, with many being closer to as much as 1700kg Tare with ball weights approaching 180kg plus. With a gross weight of 2000kg, the load capacity of 530kg was good, but it also made the breakaway a redundant extra that must have added to the cost. That money would have been better spent on a proper camping cooktop that didn’t require Styrofoam packers for transport.

At $23,999 as it was presented at Mt Warning, there was a lot of camper for the money. One of the chief selling points, according to Jawa’s Jay Hinchsliff, is the ease of set-up, which can be done one-handed. It's aided by a bit of clever design that latched the inner end of awning spreader bars to the anchor loops, rather than trying to drop a hook through the loops.

HITS THE MARK PLUS EXTRA

The forward fold hard floor layout concept was by far the most well represented camper configuration at CTOTY, and it sure does tick a lot of boxes. Whether you’re a travelling couple, a group of friends or a family, this social design is easy to set-up and facilitates indoor living in inclement weather at the large U-shaped dinette. It also offers a second bed when that dinette is converted and provides a seamless indoor/outdoor living space via the roll-up cafe style tent wall between the kitchen and the dinette. The Outlander meets the objectives and throws in a few extras, too.

There’s a stereo, TV with DVD player and a well-equipped kitchen with a four-burner stove. I would like to see an end to the trend towards heavy cast iron stove toppers held in place during travel by flimsy and easily lost and degraded polystyrene discs – hardly a solution, in my book. That’s a gripe not exclusive to Jawa, although I lay the challenge for them to change it. Weight minimisation is important, after all, as are quality fixtures.

The Outlander comes standard with a full set of awning walls, floor and draft skirt, creating a fully enclosed annex where kids can make their own sleeping quarters or for added protection from rain. There’s also a pop-up ensuite tent included, as well as a porta-loo. The queen-sized bed is a foam mattress, so in my book a decent mattress topper would be a mandatory purchase for comfort on the road.

The Jawa Outlander is an attractive camper with its silver baked enamel finish, polished checkerplate alloy edge trims and black highlights. It features a large storage boot across the rear of the trailer that gives it an appealing aesthetic advantage. The easily accessed box is ideal for carrying all of the annexe canvas and steel poles improving the aesthetics and keeping the rest of the storage for food, recovery and personal gear.

Out front the 100x50x4mm A-frame drawbar peaks with an ADR approved 2000kg polyblock coupling, grab bar, a decent handbrake, premium Ark jockey wheel, Anderson plug, and a nifty stone screen with a replaceable mesh centre. This screen has hinged checkerplate wings protecting twin gas bottle and jerry can holders. It has a full box section chassis and independent trailing arm suspension with twin shockers and a coil spring either side. The suspension retaining chains are locked into place, which seems small but can have dire implications if not done properly.

The Jawa Outlander has 12in electric brakes and adjustable camber, plus the entire undersides including the chassis and Zincanneal tub are treated with a protective body deadener. All of the plumbing and wiring is fully enclosed and protected from under body damage. Jawa have taken particular care with dust and water ingress protection, fitting high quality automotive seals and compression locks all round. It results in a finished product that is capable of some rugged offroad adventures

Body Zincanneal with body deadener underneath and baked enamel finish

Check out all the action from CTOTY 2018 in issue #122 of Camper Trailer Australia magazine. Subscribe today for all the latest camper trailer news, reviews and travel inspiration.