The Innamincka region stands tall in Outback legend as the scene of early exploration by Charles Sturt and the tragic finale of the ill-fated Burke and Wills expedition. The iconic centrepiece of this vast inland reserve is the Malkumba-Coongie Lakes National Park (NP), embracing a complex arid wetland system internationally renowned for its diverse habitats and stunning array of plant communities and wildlife.

Malkumba-Coongie Lakes NP is located 1290km north of Adelaide. It is reached by main road to Lyndhurst, the Strzelecki Track to Innamincka and the 4WD Coongie Track for the last 110km. This access road is prone to inundation by floodwaters from Cooper Creek and has been closed for extensive periods over recent years.

The park protects an extensive system of freshwater wetlands, comprised of lakes, channels, billabongs, shallow floodplains, and interdune swamps – known collectively as the Coongie Lakes. Some of the wetlands fill only on rare occasions; some contain water for a short time after periodic flooding, while others are nearly permanent. 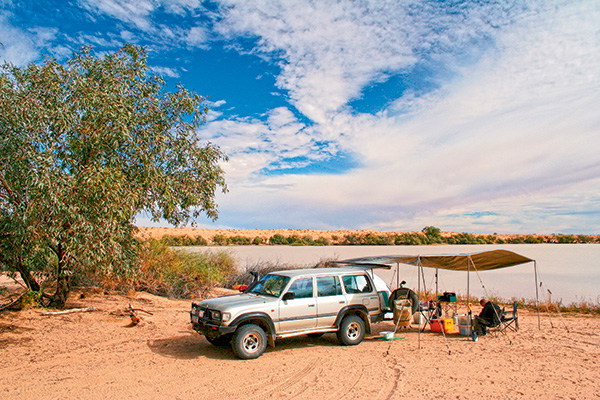 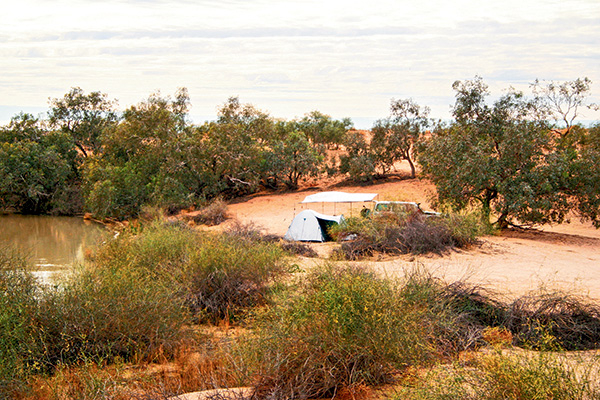 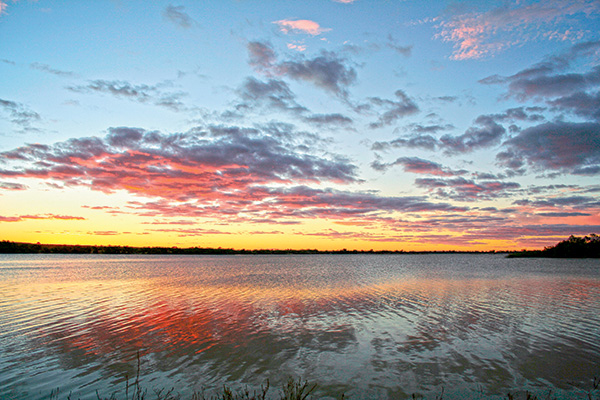 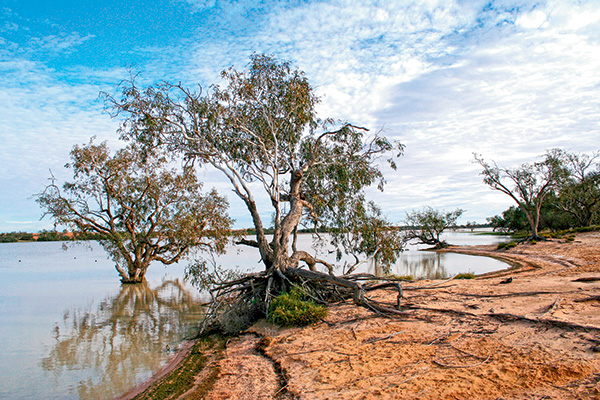 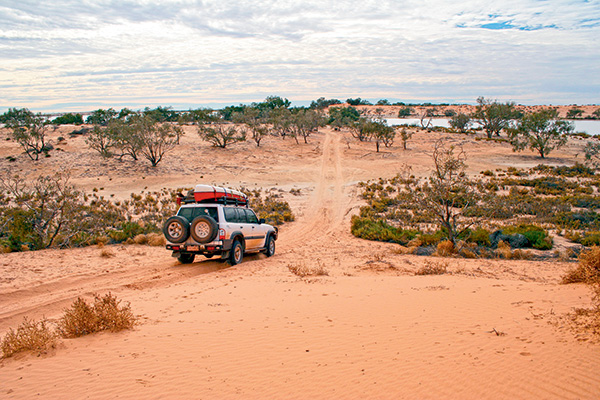 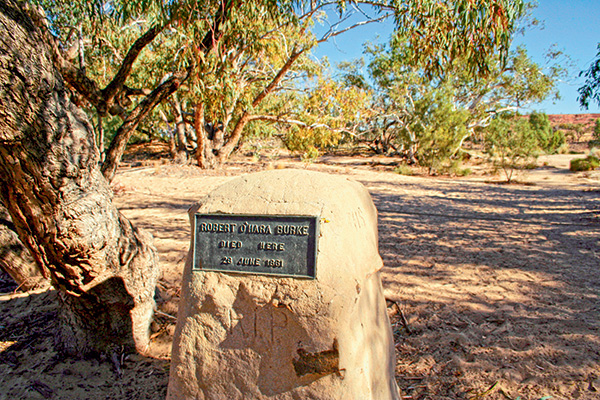 Camping in the national park is limited to an area (with a toilet) among the red gums beside Cooper Creek, or in idyllic waterfront sites around the foreshores, suitable for tents, small caravans and camper trailers. To preserve its wilderness character, motorboats, campfires, fishing, pets and generators are not permitted in the park. A Desert Parks Pass is required and can be obtained in Innamincka.

Visitors can experience the natural beauty of the Coongie Lakes by bushwalking, canoeing, swimming, photography and birdwatching.

Despite the park’s isolation, it is a unique and distinctive outback destination, rewarding intrepid travellers with the spectacle of expansive wetlands nestled among rich-red sand dunes, teeming with birdlife.

The Coongie Lakes are a key component of the Cooper Creek system, an ephemeral river draining a catchment in western Queensland fed by the Barcoo, Thomson and Wilson rivers. During periods of high rainfall, Cooper Creek floods the wetlands and may continue flowing into the Lake Eyre Basin, a vast depression of 1.2 million square kilometres stretching across large areas of South Australia, the Northern Territory, Queensland and New South Wales.

Nourished by the seasonal inundations of Cooper Creek, this labyrinth of dunes, floodplains and near-permanent lakes is one of the richest and most biodiverse wetland areas in Australia, all the more astounding for existing in one of the country’s most arid regions.

Woodland communities of river red gum and coolabah fringe the creeks, flood-outs and channels within the park. Between the lakes are dry sandy plains and low sand dunes interspersed with swampy swales, which support native grasses and scrublands of acacia and saltbush. The drainage lines are filled with dense thickets of red mulga and Gidgee. In all, 330 plant species have been recorded around the Coongie Lakes, including six that are listed as rare.

These diverse plant communities provide critical habitats and drought refuge for many arid zone animals, earning the lakes a listing as a Ramsar Wetland of International Importance.

The Malkumba-Coongie Lakes NP lies within the traditional lands of the Yandruwandha and Yawarrawarrka Aboriginal people, to whom the lakes and associated wetlands are a deeply spiritual place. In their culture, the Cooper Creek system is a Dreaming serpent and Malkumba is the body of water where the serpent rests. During times of flood, the serpent comes to life and winds its way from western Queensland to Lake Eyre.

Despite dispossession by European pastoralists in the 1870s, the Yandruwandha and Yawarrawarrka people retained a strong connection with their ancestral lands, such that formal arrangements have been established for their joint management of the park with the South Australian Government.

Innamincka was geographically destined to play a major role in the early exploration of Australia’s interior. Its central location and reliable water supply made it an ideal base camp or resting place for expeditions to the north and west and later, cattle drives from the east and south.

Charles Sturt was the first European to pass through the wetlands, in 1844-45, on his expedition from Adelaide to the continent’s interior. Fifteen years later, the waterholes and channels of Cooper Creek became the backdrop to the misadventure and tragedy of the Burke and Wills expedition, and the rescue of John King by Alfred Howitt in September 1861. Memorials to the expedition’s luckless leaders are sited near Innamincka, while the legendary Dig Tree is just over the border in Queensland.

The wave of pastoral expansion that followed the early explorers began in 1868 with the arrival of the Durack family at Thylungra, 300km upriver from Innamincka. The next two decades witnessed an era of pastoral development in northeastern South Australia and western Queensland that was notable for the economic failure of many small individual operators and the emergence of family dynasties and pastoral companies with the resources to withstand economic and seasonal oscillation. These decades set the scene for a pattern of cattle breeding, fattening and marketing that endured for almost 90 years until the 1960s, when road transport ended the colourful era of droving cattle on the hoof.

Along the way, the town of Innamincka began as a police camp in 1882 and soon became a thriving commercial centre, with a hotel, police station, store, boarding house, blacksmith’s shop and school.

The Elizabeth Symon Nursing Home was opened in 1928 as part of a network of outback hospitals set up by John Flynn and run by the Australian Inland Mission to provide medical services for people living in isolated areas. It closed in 1951 due to the declining population but re-opened in 1994 as the Innamincka Regional Reserve park headquarters and information centre.

Since the first gas discovery in 1963, the Cooper Basin has become the largest onshore hydrocarbon production region in Australia. The Innamincka Regional Reserve covers about 30 per cent of the basin in South Australia. Santos and other companies hold licences to explore for and extract oil and gas from the basin. Processing is carried out at Moomba, 90km southwest of Innamincka, and reticulated by pipeline to New South Wales, Queensland and the ACT.

Coongie Lakes NP was proclaimed in 2005 to protect the Ramsar-listed wetlands from exploration and mining and buffer zones have been established around it to ensure that these activities do not impact on the park’s natural and cultural assets.

People don’t come here for five-star amenities but to immerse themselves in the park’s peaceful seclusion and natural splendour, away from the bustle of urban life.

Check out the full feature in issue #111 of Camper Trailer Australia magazine. Subscribe today for all the latest camper trailer news, reviews and travel inspiration.