I don’t know about you but I just can’t resist a good camping spot by the water.  One with a bit of rugged scenery to gaze upon is always going to be a real winner for me, and if the family pooch is welcome then I’m in campers’ heaven!

Now we all know I don’t need much of a reason to go camping but the reason for this trip probably won’t cut the mustard if you’re trying to score a few days off work with the boss. It turns out my sister’s new pup, Hudson the spotted cattle cross, is a bit of a handful. So I managed to convince myself, and my sister, that a camping trip was the only logical way to teach him a few of life’s valuable lessons – well, that’s my story and I’m sticking to it!

Like I said, this fruit loop of a dog is a fair-dinkum handful, so I needed to find somewhere that wasn’t going to be crowded and had plenty of water around to keep him occupied. As luck would have it, one of my old local haunts, the Bridle Track out at Hill End, NSW, is dog-friendly and fits the bill just perfectly. 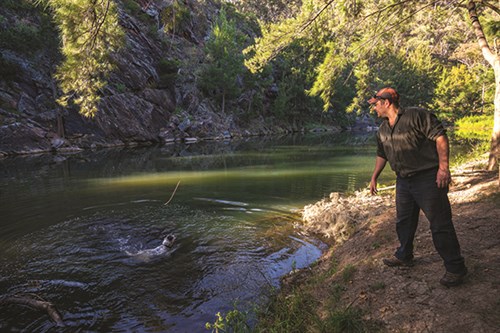 I’m not going to lie, while this place is a truly awesome dog-friendly camping spot, it’s not the main reason I was keen to make the trip out this way. Nope, it’s actually the little town of Hill End that had my bags packed in two minutes flat and the Troopy working overtime up the mountain. Or, to be more precise, it’s the town’s pub that just so happens to stand across the road from an excellent bakery/cafe!

Seriously, this place is responsible for adding a good 4-5cm to my waistline in two days, I reckon! The pies and sausage rolls here have to be right up there with the best in the country, especially when they’re fresh out of the oven and there’s a lamb and rosemary one in stock. And if you’re lucky enough to score an oversized sausage roll like I did, you won’t need to eat again for two days!

Back across the road, the beers are bloody cold and tasty, too. I’ve said it before and I’ll say it again, you can’t beat that real old-school country pub feeling, and this place has got it in spades, right down to the old cattle dog lying on the front porch and the friendly old bearded bushies enjoying a beer out the front.

Believe it or not, this quiet little town was actually one of the largest inland centres of New South Wales after reef gold was struck way back in the early 1870s. During the goldrush, Hill End and the surrounding area was home to around 30,000 people, which is a far cry from today’s population of about a hundred. Not long after the start of the rush, the largest gold specimen ever to be discovered was unearthed at Hill End, weighing in at over 286kg and standing a massive 1.45m (4ft 9in) tall. Unfortunately, when the gold yield started falling off, the town went into depression by about 1874.

It’s a real shame to see a town that once flourished with 28 hotels and a mile of shops dwindle down to one pub and a bakery shop. There’s now an information centre at the old hospital which includes a bit of a historic museum. There are old relics scattered all over the place at the Hill End Historic Site, but if you want a real insight into what it was like back in the day, you just can’t go past the History Hill Museum, which is just out of town and absolutely amazing! This is especially true if you like a real hands-on experience.

The Bridle Track itself is an awesome stretch of track. It was originally pioneered by stockmen way back in the early 1800s, and with the discovery of the Turon Goldfields in the 1850s, it quickly became a regular
route for miners travelling between Hill End and Bathurst.

These days, the track follows most of the original route along the Macquarie River. It’s not a hard track to drive, although there are some steep and winding sections, so low range is recommended if you’re towing and trailer brakes are preferred.

Being quite high up and winding your way through the valley, it’s no surprise the views really steal the show here. At some points, you’re right on the edge of the cliff looking down thinking, geez, that’s a long way down! And other times you’re down by the water scratching your head trying to figure out which spot is better than the others! Most of the track is littered with rocks but there are no massive ruts or hard obstacles to negotiate, making it suitable for soft roaders most of the time. Just steer clear when it’s wet as not only does it get slippery, but the crossing at Turon Crossing Reserve can become impassable after rain.

This track runs from Hill End to Bathurst but, unfortunately, the track is actually blocked and impassable about halfway through due to a landslide that happened six years ago. For some unknown reason, it hasn’t been fixed and re-opened yet, but locals still use it for its premium camping opportunities. There’s actually a bit of a debate going on about whether to re-open the track, and some locals have been making petitions and the like to try and talk some sense into the authorities, but nobody’s holding their breath.

The track stretches about 68km and has about eight or nine campgrounds available to choose from. The campsite of choice for me is Cave Hole Reserve. It’s one of those places you can kick back at for days if you have the chance. There are no toilets here, though. If you want those, several of the other campsites have them, including the Turon Crossing Reserve.

While the Bridle Track itself isn’t exactly hectic, it’s pretty easy to stumble across some more challenging driving spots around the campsites. It’s not the sort of place you go to go hardcore wheeling, but there are spots around that can take you by surprise if you’re not careful.

This place has just got the whole package as far as I’m concerned. It’s got swimming holes, scenery and bucket loads of history. Plus, there’s the pub and bakery a few kays up the track if you’re hungry!

There are plenty of things to see and do back in town for an entertaining weekend, and the campsites are definitely not too shabby either. So, would I go back, you ask? Hell yeah! Would the dog love to do it again? You bet ya! After a few days exploring this joint with the pooch, I reckon we can make a camp dog out of young Hudson yet. That’s if I can work out how to get him out of the water; geez, that dog should have fins!

Check out the full feature in issue #103 June 2016 of Camper Trailer Australia magazine. Subscribe today for all the latest camper trailer news, reviews and travel inspiration.