The smart-looking K9 Coyote hides a lot of value inside its popular 13-foot Hybrid body with all the amenities you’ll need on extended touring. Designed for couples who want simplicity and ease of use, the Coyote stands out in a crowd in both looks and ease of use.

A new player to the game by one of the most experienced in the business. K9 Vans are setting out to differentiate themselves from the crowd with a unique take on ease of use through simplicity, and a strict game plan of meeting every legislation they can find. But is it enough to make a typical rear-fold 13-foot hybrid stand out from the crowd to the judges? Only a tape measure and a discerning white glove can tell for sure. 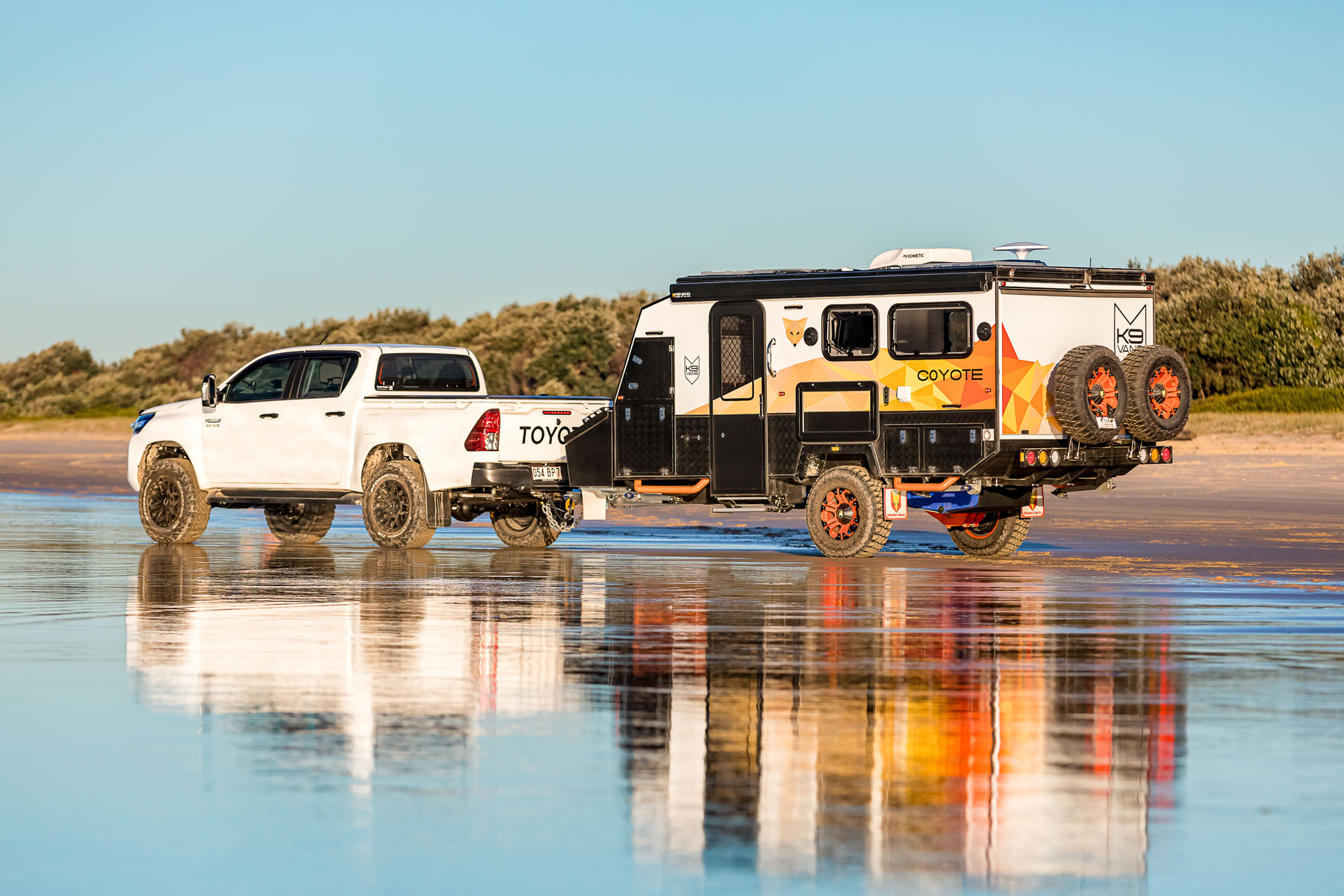 In Fit For Intended Purpose, I think the K9 actually performs better than the sum of its parts. On paper, it’s nothing special. The layout and amenities are all very familiar but their intention with the Coyote specifically is to make a camping setup that requires very little thinking power. The 240V outlets will switch from inverter to shore power if you’re in a caravan park, there’s no Anderson plug, all the power input runs through a 12 pin trailer plug and solar, there’s even a little Bluetooth dongle that’ll tell you when the camper is sitting flat. If you’re a couple and favour ease of use rather than off-road ability or expansive comforts there’s definitely an argument to be made in favour of the K9.

Unfortunately, when it comes to innovation, I think the Coyote just doesn’t shine. The kit that’s in it is mostly decent quality, and the ideas behind who will use it, how they’ll use it, and what will make life easier for them area great. But there’s really nothing new here. It’s a perfectly nice camper, it’s just not moving the industry forward in any meaningful way.

Where the Coyote shines is in Comfort. There’s plenty of storage. An internal shower. A decent mattress. And a comfortable space to get out of the elements. The decal and bright colour scheme give the Coyote a visual swagger that stands it apart from many of its competitor rigs. This includes the bright orange custom wheels and rock sliders, and a stylish K9 Van logo cut into the step. Happily, the Coyote’s appeal isn’t simply skin deep.

At $60,989, the K9 Vans Coyote model offers all the fit-out and features expected from a hybrid camper of its type at an achievable price point. In the judging arena at CTOTY 2022, it was self-evident that K9’s owner Stephen takes tremendous personal responsibility for delivering an RVS-compliant camper that achieves the requirements of Australian consumer regulations. And his focus will likely be music to the ears of import-wary buyers. At every point around the rig, K9 were able to point to features – great and small - that had been specifically selected for their utility and suitability. As Stephen puts it, if it’s no good, I don’t want it. Above the waistline, the Coyote boasts some quality fixtures and fittings. Inside there’s a 78-litre Dometic fridge, a Chef induction plate, a reverse cycle Dometic air conditioner and an ensuite serviced by a Truma hot water system.

Additions like the ePower 2000-watt inverter with AC transfer switch means you can take your 240-volt appliances on holiday. The cabinetry is visually appealing and, while the mattress was a little hefty to fold-up for pack away, Stephen told us that a new mattress design was on its way to the factory.

Outside, the 3-burner Thetford stove is the centrepiece of a kitchen galley with a fairly standard layout. The outdoor shower means that no-one needs to be banished to the doghouse for bringing dirt and sand from the outdoors – indoors. Looking at the rig’s underbelly, the finish is competent but with some room for improvement in the placement and anchoring of cables and hoses.

The K9 Vans Coyote offers an eye-catching, well-appointed, home away from home at a competitive price point. While it’s an imported product, the Lloyds-backed 6-year  fix-anywhere in Australia warranty on structure, wiring and bodywork speaks volumes of K9 Vans' confidence in the build quality and reliability of their product. For campers looking for a camping buddy that won’t chew up their wallet or crap on their holidays, the K9 Vans Coyote is a worthy competitor. The topic of Self Sufficiency is a high priority for those of us who prefer to spend time camping off-grid in a sensational remote location for long periods. Steven from K9 has created the Coyote with this in mind, however, a couple of minor changes would certainly improve the hybrid’s self-sufficiency.

Water is the highest priority, and the Coyote does well with 240L available that will allow you to sit pretty for a few weeks. Adding the ability to draw water from a creek or river that bypasses the drinking water tank would be a great addition for the external shower. A 120L grey water tank helps with those campsites where you need to be self-contained such as roadside stops and national parks.

Power is important too and with 360Ah in the AGM batteries supported by 300W of roof-mounted solar panels and your 180Ah of useable power should stay topped up for weeks. However, you’ll need to be wary about how much power you chew up running the 2500W induction cooker through the Enerdrive ePower system connected to the Enerdrive 2000W inverter. Upgrading the batteries to lithium would double the useable power and enable you to stay off-grid for longer.

Shade is provided by a wind-out 5 x 2.5m awning that is stored in a hard casing, protecting the awning from being damaged when driving a tight track. The inclusion of 2 x 9kg LPG bottles helps with cooking on the external kitchen stove or a BBQ. The strong double-dipped galvanised two-piece chassis and composite panelling offer a good build quality. The internal cabinetry looked high quality and the finish was good, however, with three different benchtop colours it looked like a display home offering options.

Underneath the Coyote looked great with its raptor coating, but there were a couple of messy points of corrugated tubing wrapped with electrical tape and cable tied to a Tek screw. The gas line for the kitchen ran under the chassis instead of through a hole and I suggest Steven should look at this as it may be something missed by his quality control team.

Overall the quality of the build and finish of the K9 Coyote was nice, though it did have a couple of flaws which might be forgivable for the low price. Thats up to you.

Off Road Ability is an area Camper has assessed trailers for over ten years but with the volume of 13-15 Foot Hybrids flooding the market, it can be a hard area to test. You cannot hide from the bulk of campers like the Coyote. It will struggle down tight tracks and it does weigh a bit (a lot compared to compacts like Patriot, BRS and Offline) so we need to look at what they’ve done to mitigate the size and weight of the camper.

Does it have good undercarriage clearance to make it easier to recover if bogged? In the case of the Coyote, yes and no. It has good clearance but the same as any one of the dozens of similar 13-foot hybrids. It does have rock sliders, which look cool in bright orange, but again, these are common on this style of camper.

The suspension is independent trailing arm built in China and aligned in Australia. What is not seen under the Coyote that you will see on other campers (Signature, Austrack, Wild Boar to name a few) are shock absorbers and springs either sourced locally or custom made for their campers. Under the Coyote are the shocks and springs the camper was made with. The established brands remove and bin these, they’ll know why but maybe K9 know something we’ve missed. 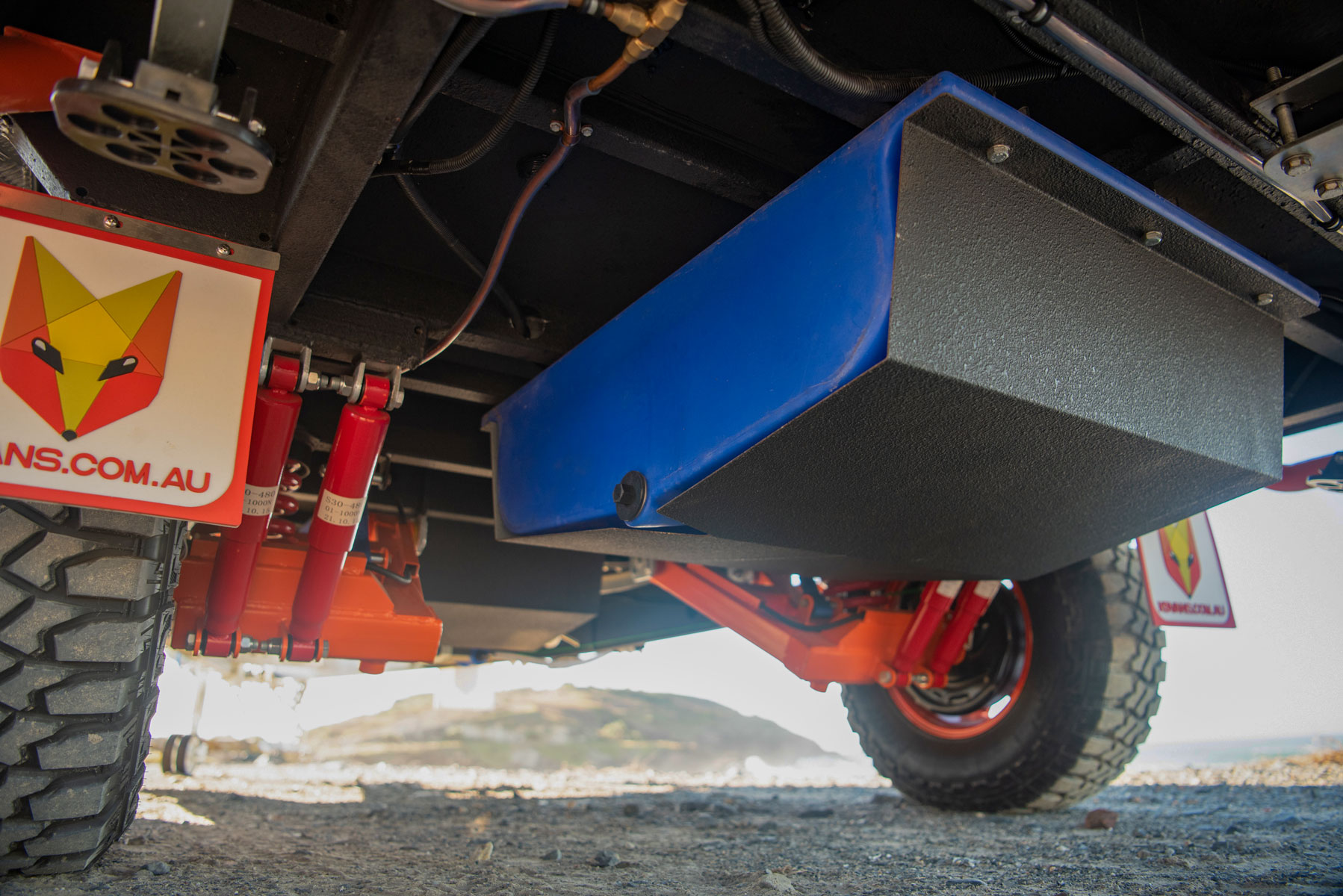 An area the Coyote really impresses is Ease of Use. Firstly, its a hybrid so from car-door to inside is seconds. You’ll find an induction cook top (fantasic addition) for a quick cuppa and you can access all of the internal storage with the roof down which is very handy f you need to quickly check you packed everything.

Popping the top is pretty straight forward, extending the rear bed-space is a little finnicky - I’d suggest total set up time, including winding out the awning and rolling out the kitchen would be in the realm of 10-15 minutes. Add in unhitching (its great to see a quality ARK 750 Jocky Wheel on the drawbar) and dropping the legs for another 10 min. Two details I like are a Bluetooth leveling dongle and app that makes levelling the camper a one-person job and the standard rearveiw camera which will come in handy backing onto campsites.