We cooked with, slept in and dragged two prototype Zone RV Expedition Series Z-10.0 campers 9,000km, all in the name of testing.

Let’s start with the bad news. The campers didn’t exactly come back in one piece and Zone RV hates us for it. The good news? Nothing that was built by the Sunshine Coast team failed; only bits supplied to them did, which were easily repaired. Plus we can confidently say these campers are more than up to the sort of offroad expeditions 99 per cent of us will ever attempt.

It is crazy to expect anyone to do the type of trip we did with a full-size camper, let alone a hard-body one with a travel height of nearly 2.5m, width of over two metres, and towed weight around 2000kg. On what can only be described as goat tracks, we were doing three-point turns, wincing at the size and closeness of trees; we got bogged more often than I want to admit and saw an immeasurable volume of rocks and stones tossed up at the two Z-10.0s.

Our review had us drive to Innamincka, down the Strzelecki, through Adelaide and across the Great Australian Bight with the goal of avoiding blacktop wherever possible. We even returned on dirt roads where we could, partly to shorten the drive but also because we could, and that’s a big part of the Zone RV philosophy. With Zone, you can go further with confidence. 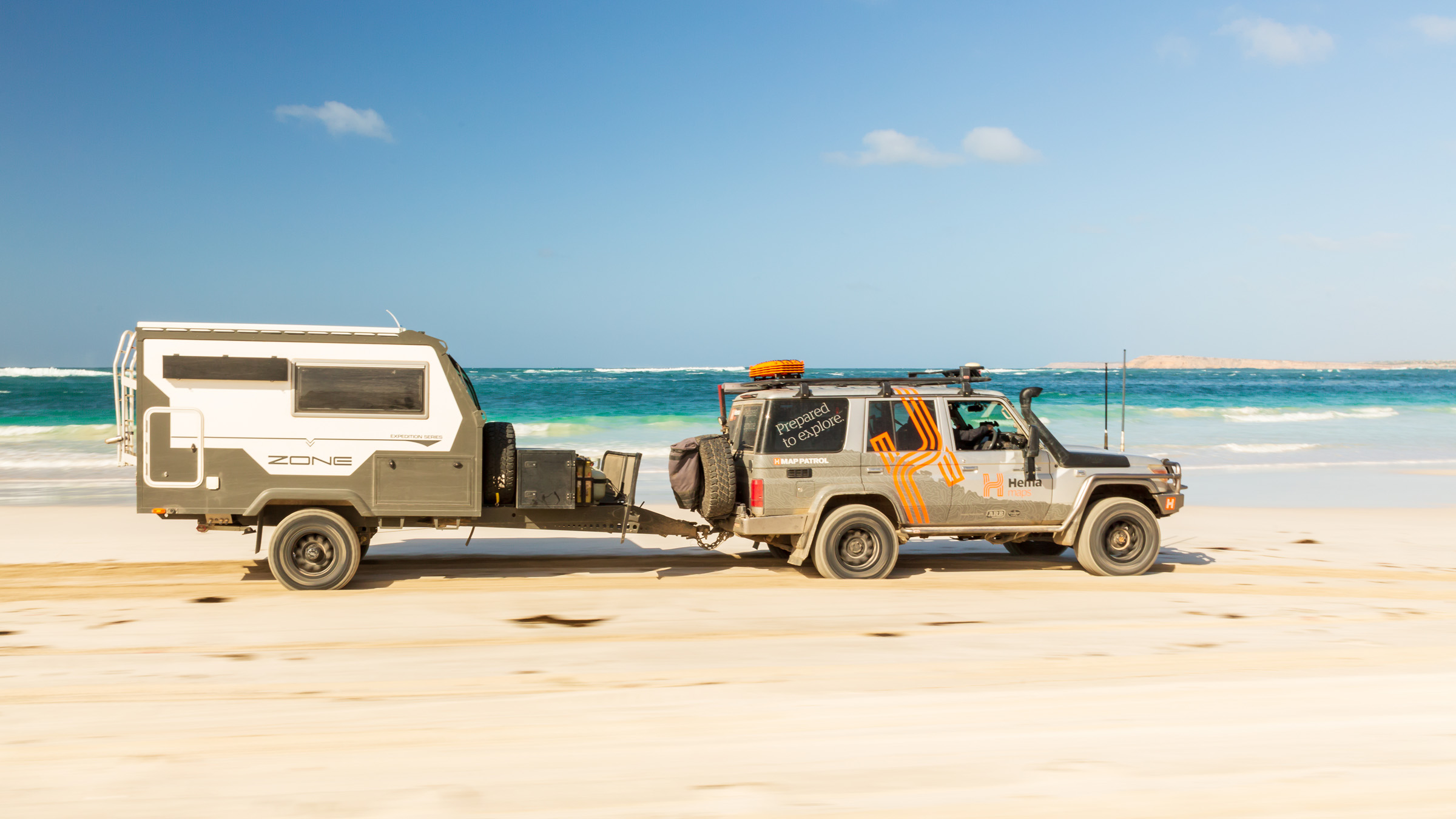 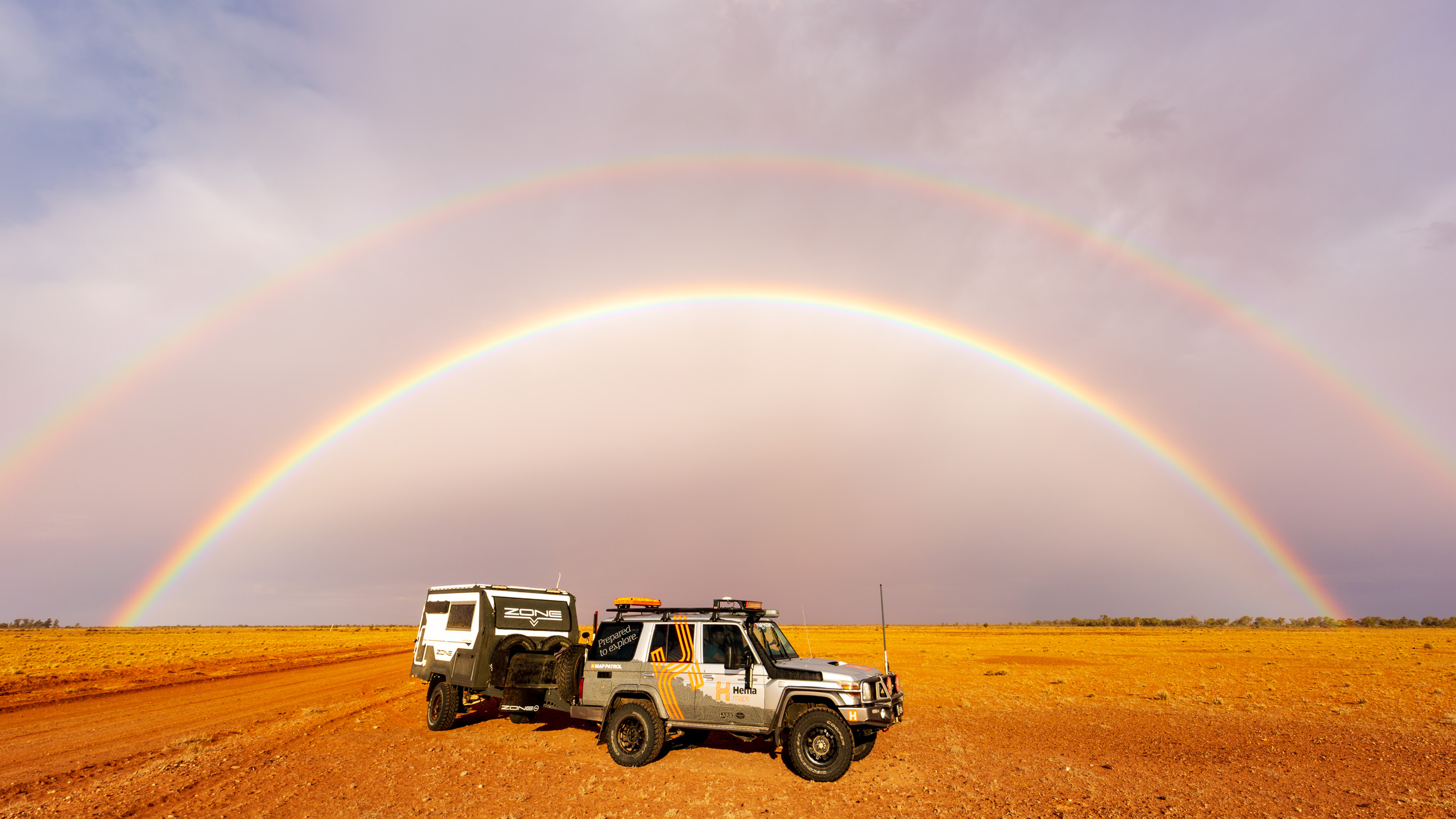 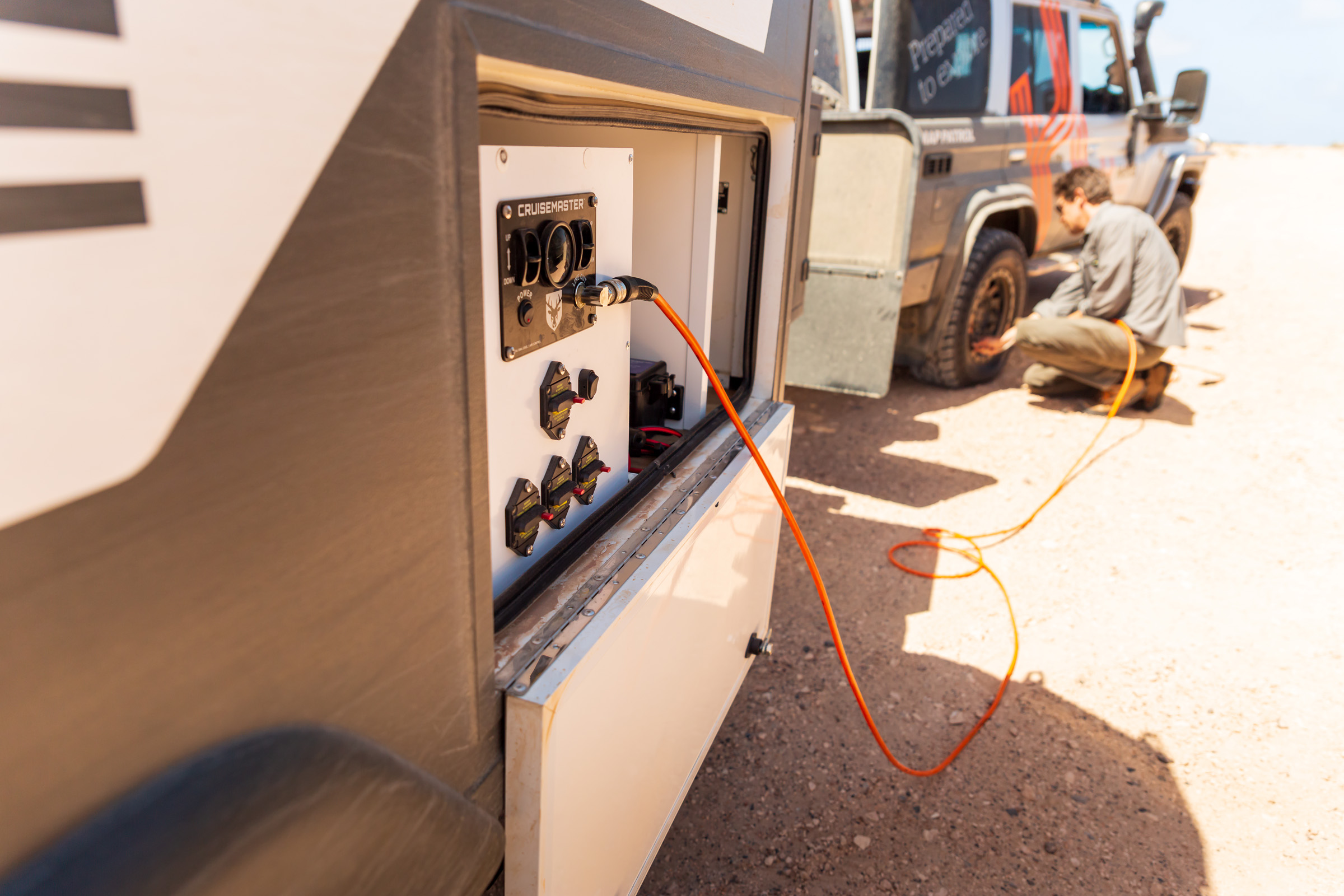 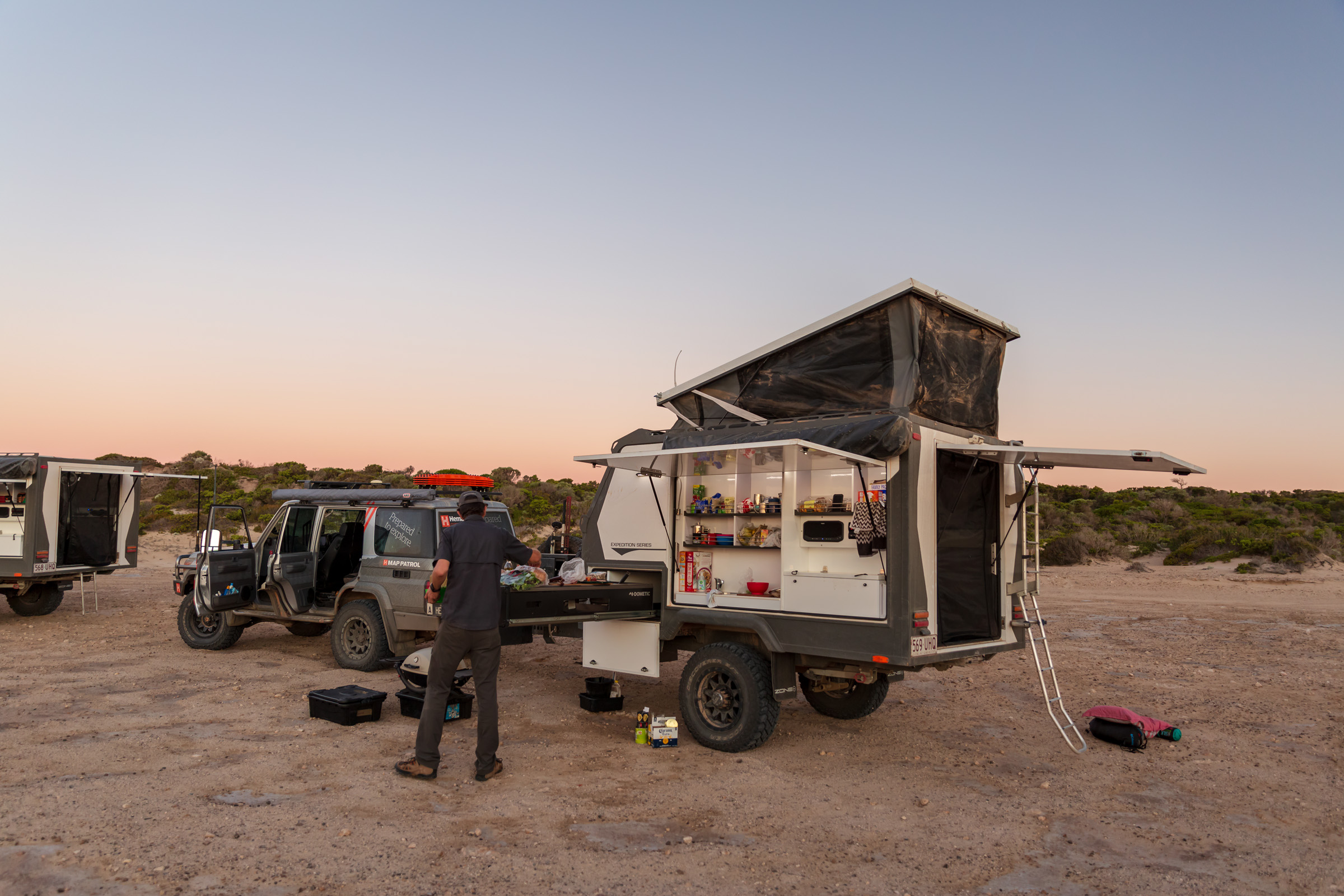 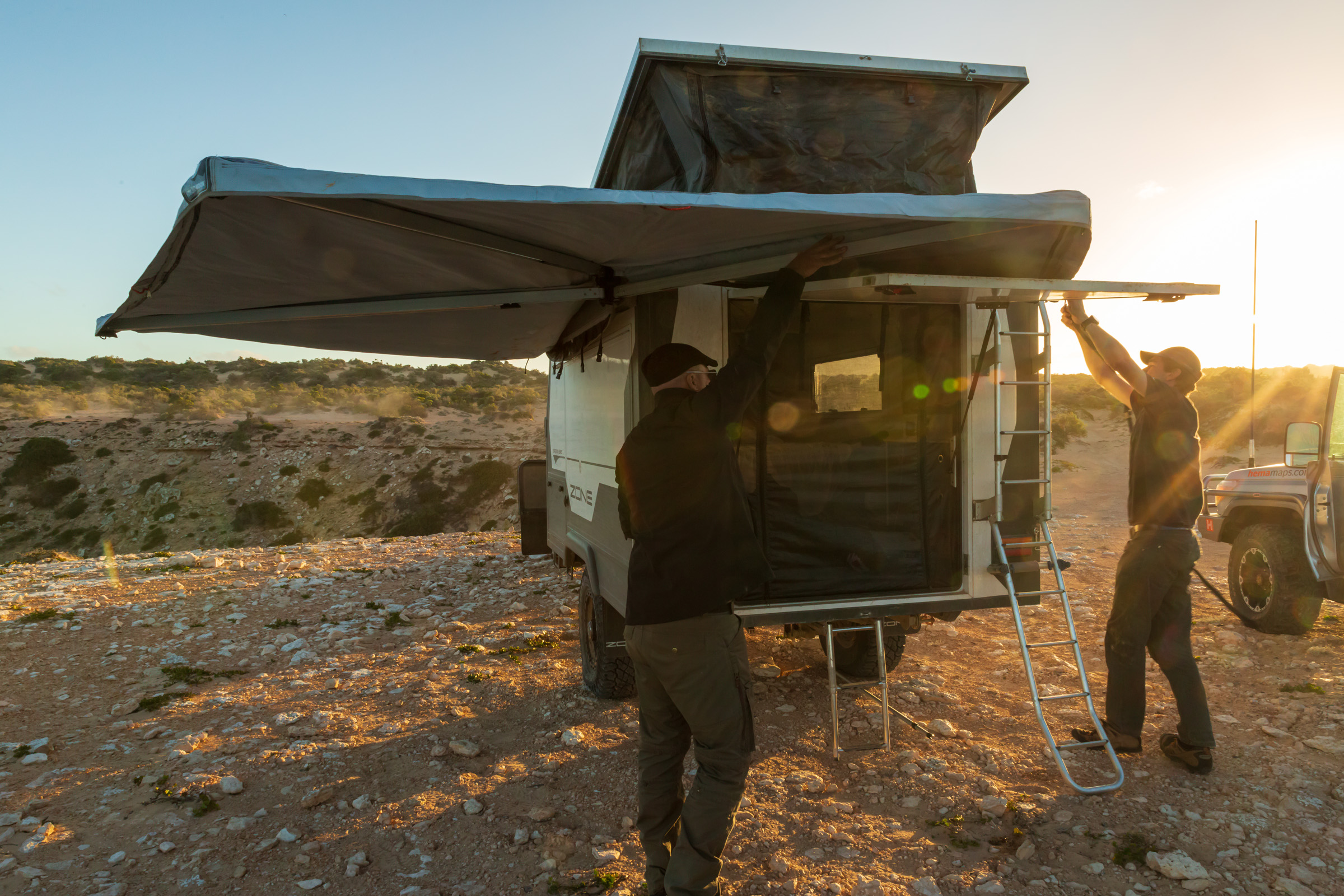 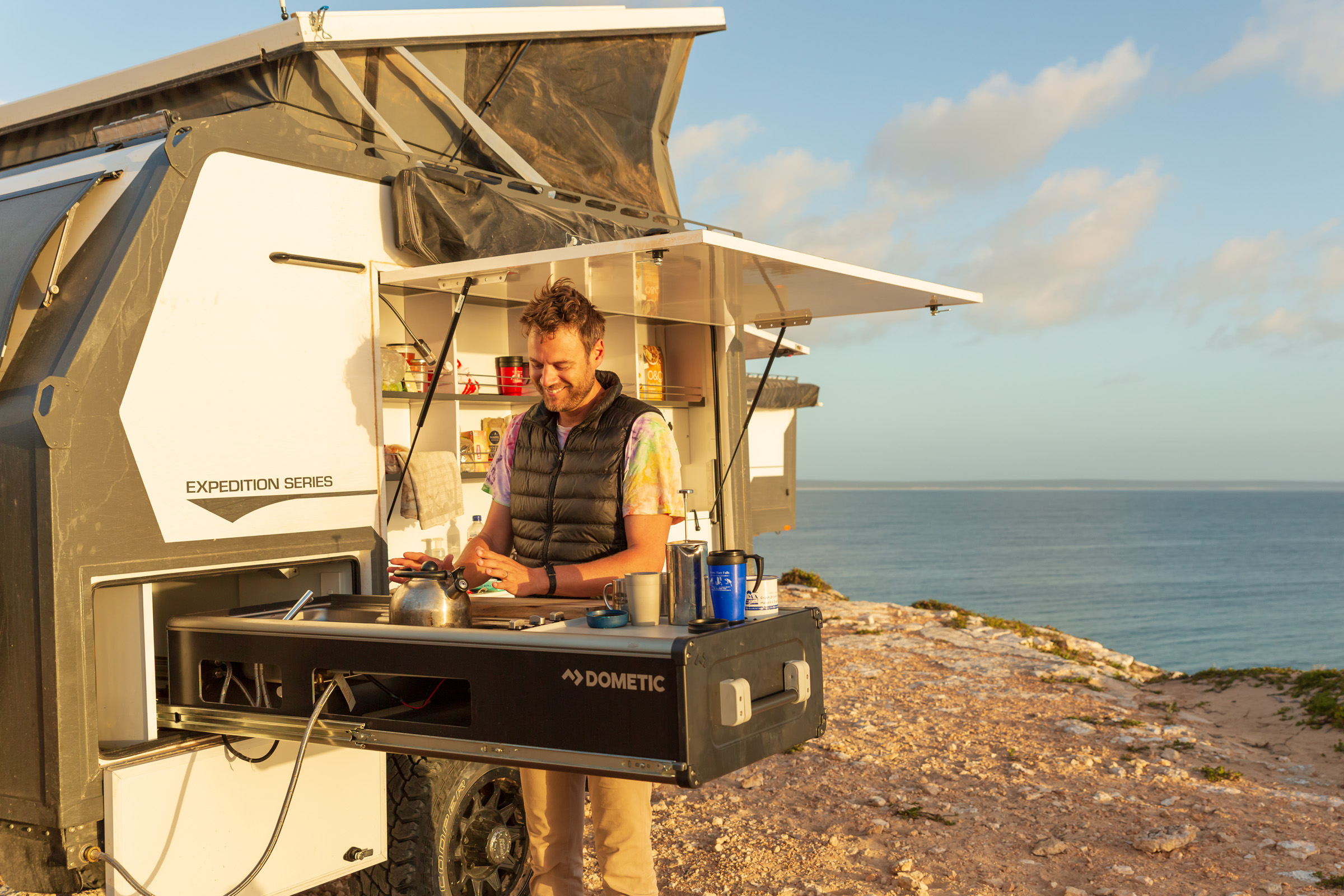 HOW THEY ARE MADE

Zone RV pioneered frameless, composite bodies after years working in the marine sector. Not only have Zone developed the best lightweight and robust panels to use, but also the technology to join the sides, roof and floor together to be weather-tight, tough and good looking.

The walls are 29mm thick, the roof the same, and the floor 32mm. All panels are foam core (the floor has an added polymer infusion to give it extra strength and damage resistance) with a fibreglass skin, and they’re made locally in Queensland. Joins are bonded together without the use of screws or bolts, with a laser cut alloy cap providing a surface to bond to and, importantly, another layer of weather protection. Buts that’s not all; the edges of the alloy are sealed before six layers of Raptor coating are applied about 100mm beyond the seams, creating a virtually impenetrable seal. You should never see a leak in a Zone RV.

The chassis is 150mm by 50mm RHS with Raptor coating, a 50mm lift and gussets at the drawbar. I asked the team if it was what I thought it was, a cut-down chassis from one of their popular offroad caravans. Turns out it is. Meaning it’s over the top, but I love it; you will not break it.

Doing the hard work under the Z-10.0s is Cruisemaster XT coil springs, with ATX airbag suspension (a $4,850 option) on one of our tested campers. Brakes are by AL-KO and measure 12”, and wheels and tyres matched the LandCruisers we were towing with.

The ride in both is great. The high height of the drawbar and chassis meant no issues with hang-ups, and the light body meant lurching was not an issue in high-speed corners. I got the chance to tow both for days on end and would personally take the ATX airbag option – not just for the marginally smoother ride, but for ease of levelling on uneven campsites and the super-useful outlet found with the switch gear in a side locker.

Without a doubt, a massive highlight and strength of the Z-10.0 is its liveability. From the luxurious queen size, memory-foam mattress, to the Sirocco fan and strategic window placement, being inside the Z-10.0 is better than being in most campers and caravans I’ve sampled. And don’t ask about regular, canvas-sided campers; they cannot compete.

The optional pop-top roof tent with inflatable queen size mattress adds $4,500 but doubles sleeping space. I spent the most time here, sleeping above other crew down below. The roof is another single piece of the same composite panel as the sides of the camper, which is raised with the help of gas struts guided by alloy legs. It’s a simple design that can be opened and closed using a hooked-rod after the side latches are opened. It uses canvas sides and high-quality mozzie screens with a bungee to keep it all inside when securing the roof down. I did find it a bit fiddly, and getting in and out of the rooftop tent wasn’t the easiest with the offset ladder, but I am told future iterations will have a more centrally mounted ladder, which should make it easier.

When sleeping downstairs, the best way to spend a night in the cool late spring air was with the door fully up, micro-mesh mozzie screen zipped tight and book in hand. Positioning the door to meet the rising sun was a ritual I began to look forward to every night, so I could wake to the coloured sky; and it was easy to make camp this way, thanks to the camper’s long drawbar and single axle. I never needed the door down for warmth’s sake, but I did lower it one night when stopped for a power-nap in a noisy truck stop. The sound insulation of the walls was impressive; again, this would give most RVs a run for their money. As would the diesel heater option, should you be planning on taking yours to the snow or Tassie’s deep winter.

Outside is great too. Well, it was until we lost the awning and shower curtain to the trees around Nuytsland, WA. The batwing style awning did a great job of sheltering the kitchen area, better than a regular rectangular awning could have, and with the shower on the far side of the body, privacy was easy when you needed a rinse.

Our photographer, Matt Williams, was responsible for cooking most of the crew meals, though we all took a turn and had to handle our own morning routines. The Dometic slide-out option used by Zone RV is a common inclusion in both vans and campers due to its easy installation and reliable quality. Is it better than some of the bespoke work we have seen in the like of Patriot and BRS? No, but its simplicity, lack of annoying legs, and good, workable height are all great touches. It is not perfect though, with the three burners too close together to use independently with most regular sized pots and pans. Even with this minor flaw, an external kitchen is a good option, because it gives you a workable platform and massive sink for cleaning up, even at $4,850. Zone RV also offers an option with a slide-out Weber barbecue and integrated sink that I would like to see, given it saves $3,300 on the Dometic slide-out but may be just as useful.

A benefit of the construction method and insulating properties of the closed-cell panelling is the ability to form a fridge/freezer box into the design. Found in the standard and clever pantry-esque kitchen section (complete with small sink) that is hidden behind a false wall on the camper, an Isotherm fridge/freezer panel provides cooling to the 75L box. It’s a great feature and one that can be supplemented with an additional, traditional 12V fridge in the drawbar lockers if needed. I would like to see a bung in the fridge to drain any spills or to allow water out when cleaning.

In the pantry, there are shelves aplenty with bungee cord used to lessen the chance of tumbling Weet-Bix. There is enough space for food to feed a couple for a week, and the aforementioned small sink. Near the fridge is a Fusion panel speaker that easily connects to bluetooth and does a more than able job of pumping out tunes. You should never run out of tune-juice either, with the standard 100Ah lithium-ion battery fed by either a 50A Anderson plug or 220W solar panel through an Enerdrive management system. Excluding the roof-mounted solar, all the power systems are found in the massive under-bed storage area, without taking up much of it!

The high-spec camper had options on top, with an extra battery and additional 110W solar panel plus an invaluable 2000W inverter that kept our camera gear running the full trip. If you want the inverter, get the extra solar and battery.

Filling the sink and running the external shower or drawbar-mounted tap is a pair of watertanks totalling 160L, with the option of another 80L on top. They are pressure filled with a garden hose fitting, monitored with water-meter and filtered before being pumped by a 12V Shurflo which also works a creek-pull system for filling up from bodies of water. You can option on a gas hot water system for only $950, which I say is a bargain if you like a hot rinse.

What broke? Some of the external add-ons. The awnings lasted until we hit the tight bush around The Old Telegraph Track on the Eyre Peninsula and the external shower curtain holders and external side LEDs about the same.

One fridge stopped working as we hit WA. We lost a side hatch door to a tree when it opened on its own and most of the Raptor coating was gone from the leading edge of the alloy scrub bars by the time we hit Ceduna.

The side-mounted latches for the rooftop tent didn’t last long in the trees and we managed to crush the rub-rails on the leading edge of the roof on both. A bunch of USB plugs failed us. A stoneguard bracket broke and we ruined some tyres. To top it off, we nudged the sides and rear up to some serious branches that scratched and cracked the fibreglass skin of the panels.

Is it all fixable? The add-ons can be replaced and the latches for the rooftop tent moved to the front and back to avoid repeats of the problem easily. Raptor coating is available from most hardware stores and is easy to apply, though getting the right Zone RV-specific tint won’t be easy. The USB plug issues were likely due to loose wires or faulty plugs, easily rectified I expect. The stoneguard was a bolt from Bunnings, and the damage to the side and rear panels was patch repairable.

Given it is a fibreglass skin on a foam core, the area around the damage can be taken back, the damage filled and the area re-skinned with fresh fibreglass. To prove how easy it was, the team at Zone RV had both Z-10.0s repaired and on display at their official launch within a week. Outstanding.

Alternatively you could not put the RVs through an insane battering in the first place!

Zone RV do not hide from their price. What is listed is what you pay. But with the high figure comes capability from years of continuous improvement and an unwavering focus on quality and service.

Internally, we have had heated conversations on what constitutes value. Some suggest Zone RV’s close second place at sister magazine Caravan World’s AL-KO’s Best Aussie Vans was down to the staggering price of the caravan entered, but I’ll settle it – Zone RV have a waiting list and a rising average sale price, demonstrating there is a market for no cost-cutting caravans. Whether that translates to campers, time will tell, but I would wager it does.

Coupling DO35 with handbrake

ACCESSORIES ON SPECCED UP MODEL