Living life on the road

“That’s your room for the night,” said Brad, pointing to the camper trailer perched on the hill. It was an old softfloor of the type most of our local manufacturers used to turn out a decade or more ago. I should know, our family Trackabout’s one of them!

Handy I guess, given this trailer wasn’t erected yet. But with no shortage of hands on deck, it whistled up in minutes. It turned out to be more than 16 years old and very well used, having travelled from the ‘south island’ (Tasmania) to the ‘north island’ (yep, what we might call the ‘mainland’) for plenty of family holidays. Taswegians probably spend more time exploring the rest of Australia than the rest of us and this old rig had plenty of scars and stains to prove it.

But you know what? It was comfortable, warm and dry. And I was very glad of it because it was a damned cold night on that hill an hour or so north of Hobart! Yep, I lead a weird sort of life and this month I figured I’d share some of it with you. 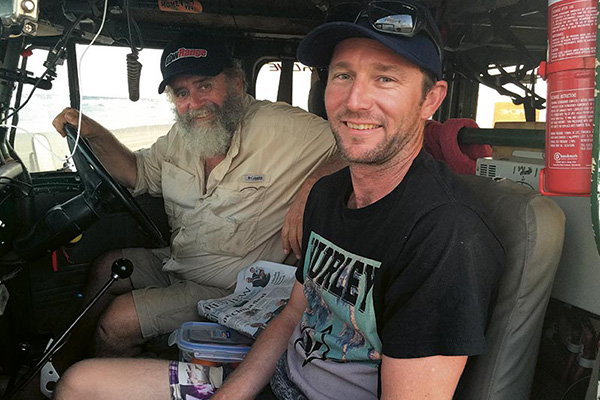 DEVIL IN THE DETAILS

Every year, there’s a month or so where I spend more time on planes than driving trucks or heading bush. The show circuit kicks off and suddenly I’m in Sydney, Melbourne, Perth, Adelaide and even bunging in an appearance at home in Brisbane. Quite often, I’ll take the opportunity to visit the wife, of course. Mostly because, after not seeing me for a month or more, she’s usually pretty happy with me. It’s hard to stuff up when you’re not at home...

And this year, like last year, sandwiched in the middle was the best event on the calendar, the annual Tasmania Bush Cook Off sponsored by travel experts Opposite Lock. I’m a guest judge and it’s really hard to make this sound like ‘work’. The competition is held on private land in the beautiful Coal River Valley and this year five teams braved open fires to produce an entree, main and dessert. Yep, 15 incredible meals. Good thing there was plenty of throat-cleansing cold beers between courses...

It’s an absolutely fabulous event thanks to the Derwent Valley 4WD Club and one that, if you ever get the chance to go, you should! As much as anything, there’s a trophy for ‘people’s choice’ which means all the teams cook more than enough for the crowd to enjoy a taste, too.

So, after a night in the camper trailer and a big round of thanks to everybody involved, I hopped on a bomber and flew back to Queensland just in time to grab old Milo and head to Fraser Island for four days filming with Channel 7. I went from wearing everything I had to shorts and bare feet; from eating Tassie oysters and scallops to pulling worms for bait on the beach. It was weird, made even weirder by dropping the truck home and asking my lads to wash out the sand because dad had to fly straight to Sydney for another weekend show.

Check out the full feature in issue #96 of Camper Trailer Australia magazine. Subscribe today for all the latest camper trailer news, reviews and travel inspiration.