Australia’s alpine regions occupy quite a small portion of the national landscape, but nonetheless are very significant factors in both our emotional, cultural and recreational lives. This applies more so to the NSW Alps than it does to the Victorian High Country, where distances to major urban centres are significantly less and the landscapes of huge timber, deep shady valleys and sweeping views are more readily accessed.

The area has obvious seasonal attractions, such as snow in winter, but early spring to late autumn is an active playground for camper trailers and the like.

In the natural world, the many waterfalls are worth the trip in spring and early summer or after heavy rain, and wildflowers on the high plateaus and plains are an appeal for many. Though just a small part of the 1100 species of plants to be found in the Alpine National Park, the Bogong Daisy-bush and Silky Daisy are among 12 species of plants not found anywhere else in the world. 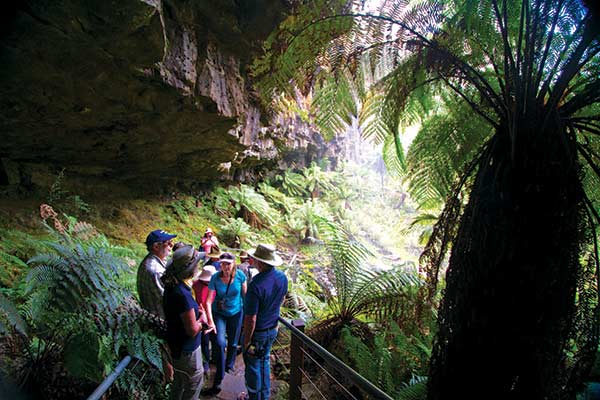 Snow gums dominate the ecology near the snow line but in the highest areas the weather can be too extreme for trees to grow and alpine heaths become more common. The views, when driving along a valley next to a towering blue range of mountains or gazing out over a seemingly endless sea of forested slopes, valleys and ridges, can be simply breathtaking.

During winter, the area is thick with snow and crawling with activity but it is no time for camping. In summer the cooler air, especially at night, is a stark contrast to the warmth of the sunshine and it’s a great place for sitting around a campfire. The crystal clear mountain air makes star watching a fantastic occupation.

Be warned though, that the weather can change suddenly and snow can fall at any time of the year — even mid-summer — so ensure you have some cool weather clothing with you at all times.

The whole area is criss-crossed by tracks, most of which owe their existence to the 1939 fires near Melbourne and then the post World War Two building boom when the demand for timber escalated rapidly. Most are suitable for even 2WD vehicles in good weather, but would require 4WD if it is at all wet. Note again, that the weather can change suddenly and rapidly. Some tracks, most especially when approaching the tops of ridges or peaks or in steeper country, require 4WD and low range, to safely proceed. These areas are not suitable for towing trailers.

Your 4WD driving skills need not be of the highest order but if you feel a little uncertain, then there are organised tours that you can join to have an experienced leader to make sure you get back in one piece. Make sure you have the UHF turned on and monitor it for radio traffic to avoid meeting other travellers on narrow or steep sections. But once you are at your destination, the views can, as stated, be breathtaking and the solitude fantastic.

Camper trailers can access many areas with an appropriate 4WD tow vehicle, but there are some areas which are too rocky or steep to attempt and the capacity to turn around on some tracks is limited. There are numerous camping spots. In some areas they are well serviced with composting toilets but in others, campers are well advised to come equipped with their own facilities.

Note also, that some trails are subject to seasonal closures, so in winter, always check at local tourist information centres with police or parks offices.

If you are into bushwalking or mountain biking there are numerous smaller trails that lead you to points of interest; including many of the better known huts. Most are well signposted. Some can be lengthy and take several days to complete, while others are single day journeys.

For the more adventurous, there is challenging white water rafting and canoeing along the rivers in the area, when water levels permit. Check for river levels with the Victorian Bureau of Meteorology.

The whole region was one of intense activity in the days between 1850 and 1900 when alluvial gold was being pursued all over Victoria, as gold panners sought a new Ballarat. The streams still give up small amounts of gold if you have the patience and a little luck, and a reading of local history can bring colour to your travels, even if not to your pan. Towns such as Dargo, Harrietville, Mitta Mitta, Omeo and Bright still owe their current prosperity to the days of gold.

Locations such as the Buckland Valley have a darker history. Here, in 1857, the local miners rose up against 2000-plus Chinese miners in the area. Three Chinese died in the riot, a newly built “Joss house” was destroyed and encampments broken up. Thirteen European rioters were arrested by police but all were acquitted by juries, to the cheers of onlookers. Even though the Chinese were invited to return, only fifty chose to do so.

The Buckland Valley is today reached by travelling through Myrtleford and Porepunkah and though there are numerous allocated camping areas, we must warn visitors that there is only a single toilet available to the public in the whole valley.

The Dargo area is another area of intense offroad activity on weekends and holidays. The ready access to the coast around Bairnsdale and such popular centres as the famous Dargo Pub ensures that there is plenty to draw you in. The small town of just 150, in the foothills of the Dargo High Plains, has all the basic necessities for those who love a touch of the modern world — restaurant facilities, a great country pub and a store — but easy access into the more remote hinterland beyond.

Like most of the camping spots in the area, it is required that you bring your own firewood and are best advised to bring fresh water and a porta-pottie. The High Country is full of streams of crystal clear water, often with long and/or deep pools that make for great fun in the warmer months, but the crowds that swarm through the area at times, cannot be guaranteed to leave the environment in the most pristine of conditions.

Fishing is, however, popular, with cool water fish such as trout occupying most streams.

If there is any issue with the High Country, it is its popularity, with places such as Sheepyard Flat — just a short drive east-south-east from Mansfield — becoming saturated with people and activity on weekends and public holidays. Be prepared. This wide grassy area with plenty of shade cover, situated on the banks of the Howqua River, is ideal for large groups, and that’s what it attracts. Even if you can find a camping spot, be aware of the constant stream of traffic along the access roads.

Further along the Howqua Valley there are many other camping areas, and access is pretty easy as long as it doesn’t rain (the few tracks in can get pretty slippery) and it is an easy base from which to explore the region, with lots of not-too-difficult trails that can take you to some of the many huts and other tourist attractions in the area.

This whole area is one of the most fire-prone in Australia and at times some of the area’s towns have been nearly obliterated by raging firestorms. Always keep control of your fire; ensure at least a three metre cleared ground around any fireplace, make sure you have a bucket of water handy and never leave a smouldering fireplace. Always check for Total Fire Bans (1800 240 667) and fire conditions prior to leaving on a walk or excursion, and carry a small radio or mobile phone at all times.

It is also a good idea to ensure you carry a portable gas stove, as the lighting of fires can be restricted at times of extreme fire danger. In Total Fire Bans, any external fire, even in a gas fired cooker, is banned.

Also come prepared to carry out all your own rubbish, as there are no facilities for it to be left at any of the allocated camping areas.