This is Marlin Campers’ third time at Camper Trailer of the Year and having won Best Value For Money back in 2020, we know there is a lot on offer in the tent-on-trailer design. This year, the NSW team bought their most extravagant model yet, the Ultimate Explorer.

When we first met Steve from Marlin Campers at CTOTY 2020, his target audience was the budget-constrained family, looking for a quality Australian product, offering an authentic camping experience, without the traditional discomforts. Three years later, Marlin have moved on in leaps and bounds.

While remaining true to its roots, at $19,490 the Marlin Ultimate Explorer now has its sights set on another set of campers; people who value the quality and simplicity of the Marlin side-fold soft floor camper concept, but who are prepared to invest a little extra to enhance their time in the Great Outdoors. 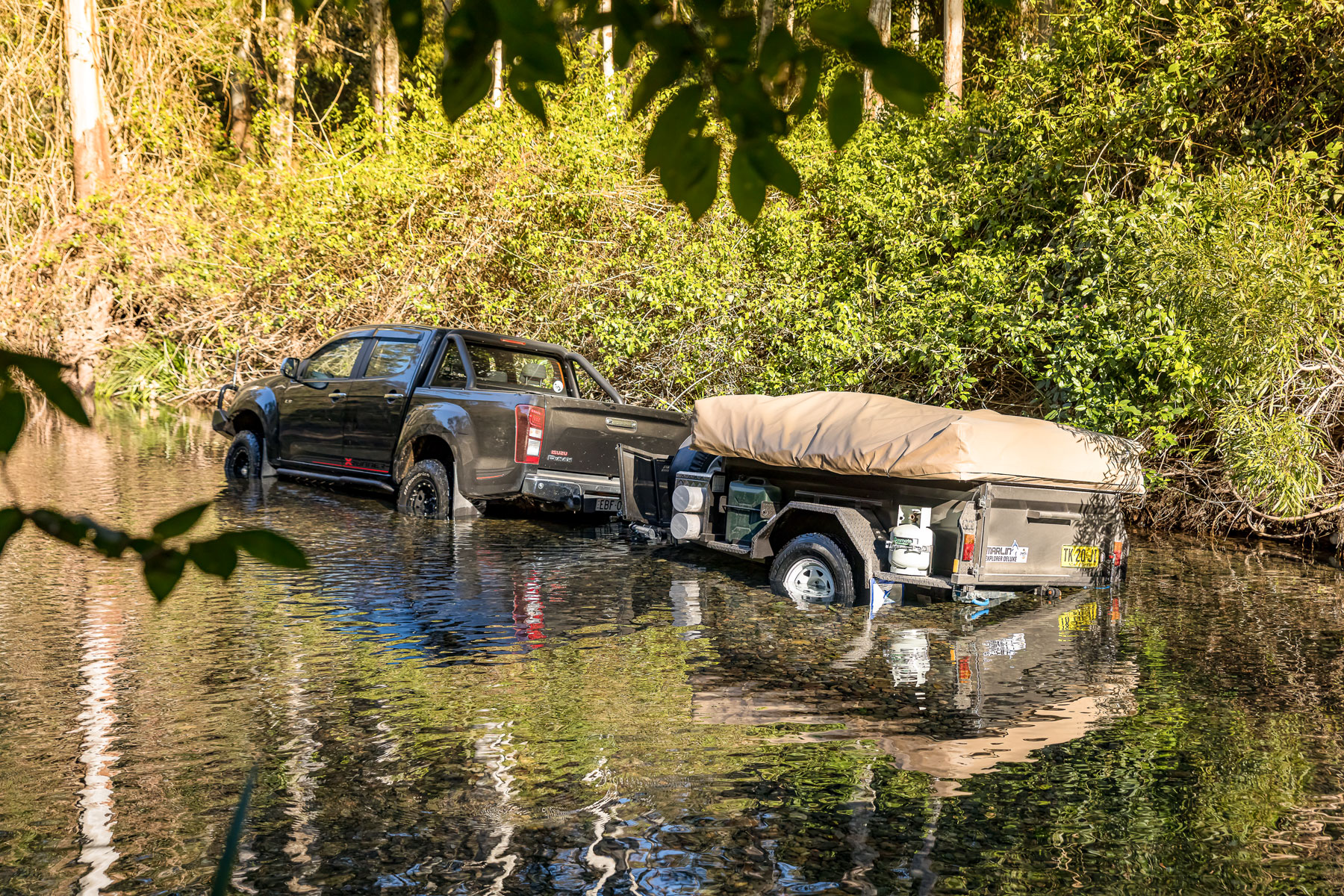 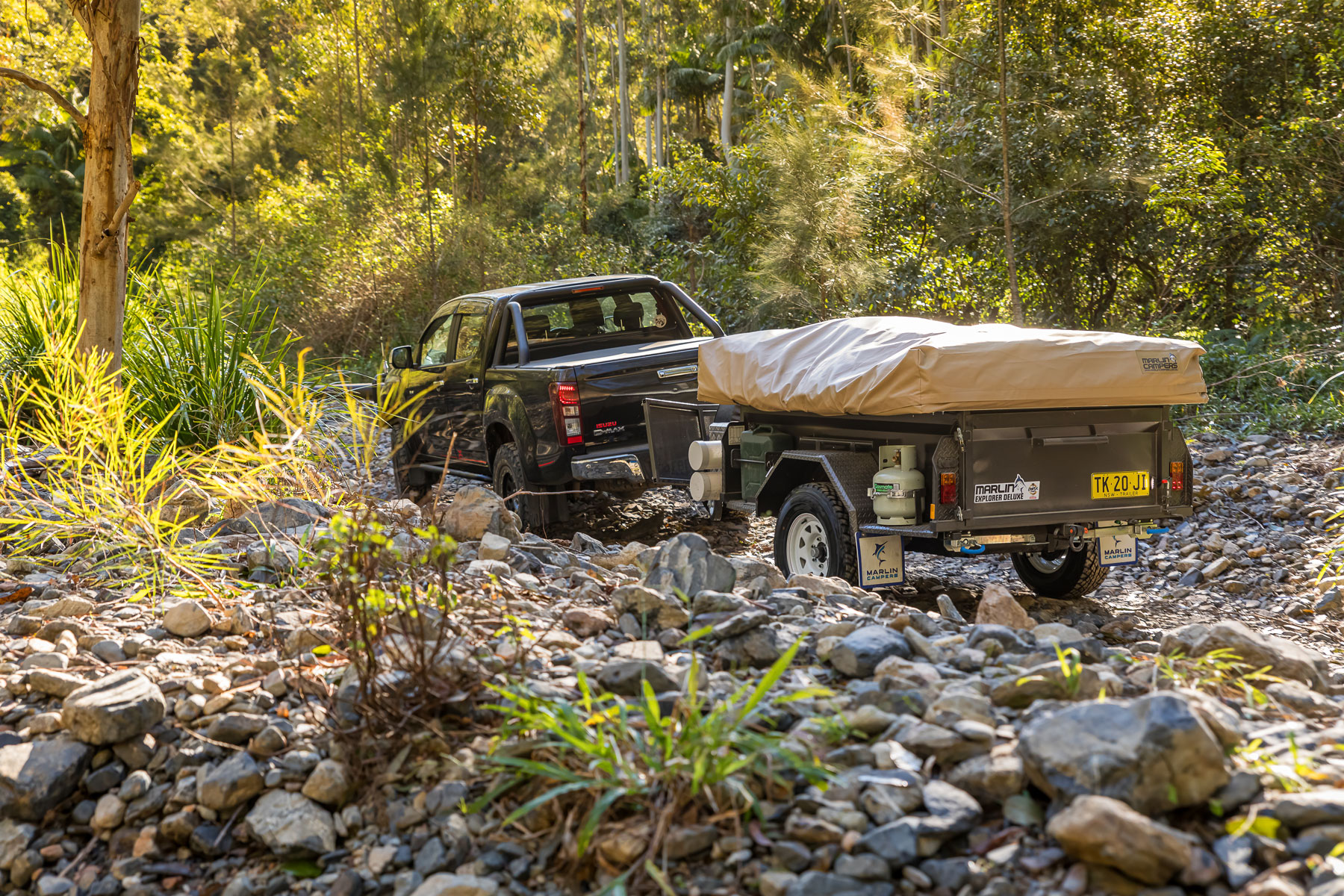 Offering a highly capable offroad camper trailer, partnered with some of Australia’s top RV componentry, the Ultimate Explorer is a lightweight that punches well above its weight; this is a genuine alternative to a range of higher-priced adventure campers.

The Ultimate Explorer offers incremental rather than radical changes to Marlin’s tried and tested range. Significant among the recent additions, this model sports the REDARC GoBlock, a portable power pack that integrates a 100Ah lithium battery with a 50A fast charger, solar regulator and a bunch of useful connections.

With confidence in the GoBlock’s capacity to help light up the night, Steve has added a range of internal and external outlets to the camper, including one to power the Country Comfort hot water system and pump. The dual Camec 60-litre water tanks underslung double this rig’s previous water carrying capacity. Walking around the camper, there are new and useful things to find in lots of places. Indeed, Steve assured us that the Ultimate Explorer enjoys no less than 19 modifications to previous models, with most changes driven by customer demand and in response to judges’ CTOTY feedback over the last two years. It’s hard to argue with Steve’s basic proposition that Marlin offers ‘everything you need and nothing you don’t.’

When it comes to maximising the joy of an outdoors lifestyle, the Marlin Ultimate Explorer proves that it doesn’t take an eye-watering level of investment to hit the highways and byways in a comfy, capable camper.

Back in 2020, the Marlin Escape Delux, a smaller trailer with less inclusions took out Best Value For Money due to its simplicity, its robust build and ease of use. Enter the bigger, more offroad-oriented Explorer with a raft of options to give it its Ulitmate name. But does that erode what is so special about the Escape?

A little, I’ll be honest. The Ultimate you see here retails for a night at the races under $20,000 which has moved it out of the range of very basic imports to more well-optioned models. Am I comparing apples to oranges? Yes. I would not cross-shop a low-cost import to a Marlin, their fit and finish and build quality are not on the same page but you might and you might be drawn in by the exuberant specs and inclusions.

So why does the Marlin still score well for Value? Because its inclusions are quality. The Drifta kitchen (soon to be replaced by an in-house built version) is locally made and quality. The REDARC GoBlock is the best-in-class all-in-one power bank, the tent is top-notch and I highly doubt you’ll ever break the trailer. All of these parts belie the simplicity and charm of the Marlin which for me is still its X-Factor. The premise of the very first Marlin was a tent on a trailer that you could remove with four bolts. These days, I suspect most buyers leave their tents on year-round but the trailer is still the same heavy-duty, well-built unit that will follow you anywhere you go.

The tent is seam welded, has a deep floor and is well insulated. It is still easy to set up and has plenty of space, especially with the annex fully set up. What the Ultimate brings is a kitchen with the bench space to cater a small tribe and some tech to make living away from home more comfortable and easier. The Marlin Ultimate Explorer has been specifically designed for heading offroad using a proven methodology. It is lightweight and easy to tow, as we witnessed during our tow test, but also as tough as nails. This is an old-fashioned 7 x 4 trailer with greaseable ARK rebound 5-leaf springs and a 40mm solid square axle. As Steve told us, “If you can get your vehicle somewhere, the Marlin Ultimate Explorer will always follow you.”

The corners of the trailer are protected using checker plate while the Hammertone paint finish is easy to maintain and any scratches or stone chips can be easily repaired using spray paint available at any hardware store.

At the front of the A-frame sits the ARK hitch and a stone guard that better protects the front of the Ultimate Explorer. Steve has also upgraded the axle U bolts to 5/8 inch heavy duty that adds strength, great for corrugated tracks like the Connie Sue Highway or the Tanami Road.

After a long day bumping along a remote desert track, a good night’s sleep is in order and with a four-minute set-up time for a quick camp, it won’t take long for your head to hit the pillow. The queen-sized 150mm high-density memory foam mattress is extremely comfortable and Judge Dan was keen to enjoy an afternoon nap. Being able to carry 120L of water on board and with the Country Comfort hot water service, washing the dust off with a refreshing shower is quick and simple, especially when you can move into the spacious tent to get changed. This soft floor camper has an enormous floor space and being so quick and easy to set up, you’ll be amazed. The Drifta slide-out kitchen provides plenty of bench space and storage making meal preparation and cooking a real pleasure I think you’ll feel like you're cooking at home but with a much better view. It wasn’t that long ago that the only campers you could buy had a soft floor, hundreds of poles and take the best part of an hour to set up. This isn’t the case with the Ultimate Explorer; you're done with four pegs and some quick internal pole adjustments. Owner Steve recommends you don’t adjust any poles around the bed. Setting up the awning takes a little longer, but once done a few times, it’ll only add a 10-15minutes.

There’s nothing here that’s fundamentally changed the design from the old tried and tested soft floors of years gone by, except the tent setup. It saves huge amounts of time without losing any space – and is actually insulated. If ease of use is the Marlin's strong point then self-sufficiency is surely the weak point.

There’s only 120L of drinking water which is really the bare minimum. You’d be filling both 20L jerry spots with water too for 160L total, not bad, not good. There is up to 200W of free-standing solar, and a 100Ah REDARC GoBlock lithium setup which is brilliant, but expect to have some jerry cans in the tow-tug and be conscious about power consumption. A creek draw setup for the shower would definitely be worth adding in as a DIY project.

I’ll be completely honest about the Quality of the Finish, I had to deliberate on this one for quite some time. The fit and finish of the Marlin is nowhere to the levels of campers like the Exodus or Alpine. So scoring it high didn’t seem right. But scoring it low didn’t seem right either. There is absolutely nothing wrong with the fit and finish at all. The kitchen is perfect. The paint and panel is perfect. The tent is perfect. It’s just that there’s not much polish on any of it to actually be good or bad. It’s a camper trailer. It’s as simple as that. The Build Quality is hard to compare as well because it’s just so unbelievably simple. The whole thing only weighs 640kg so it doesn’t need fancy engineering or trick suspension to work. It just needs a simple leaf spring setup, good welds, solid panels, and it absolutely nails all of that. Likewise, the tent is perfect, it’s impregnated with a special compound so never needs servicing either. It’s not fancy looking, but treat it well and it’ll last forever.

The second lightest camper in the field is 64 per cent heavier than the Marlin. You can drag this thing through any terrain imaginable, and if you do damage it a trip to the local motor trimmer will fix the tent, and a can of hammer tone paint will fix the trailer. For me, the only reason it didn’t score 10/10 is the vulnerability of the soft-sided tent cover.