It’s a destination most of us dream about, so when the Patriot Campers crew asked team Camper Trailer Australia to join them in the Kimberley, there was only one answer: abso-bloody-lutely!

The Kimberley. Those two words had long ignited my imagination, transporting me to the passenger’s seat of a helicopter swooping over rugged gorges, virgin coastline and life-giving waterfalls at sunset. I was the main character in my own high-budget tourism commercial, heart aflutter at the most remote and beautiful corner of this fair nation.

Of course, I’d never actually stepped foot in the area, so when Justin Montesalvo of Patriot Campers called to ask if I’d like to accompany his R&D convoy on a whirlwind tour of the East Kimberley, I fist pumped out the car window before calmly and professionally accepting the offer. 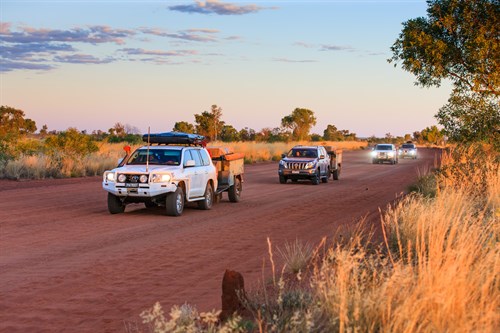 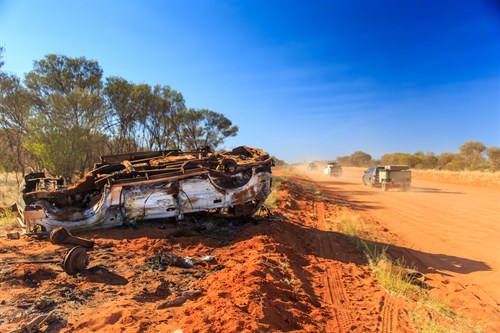 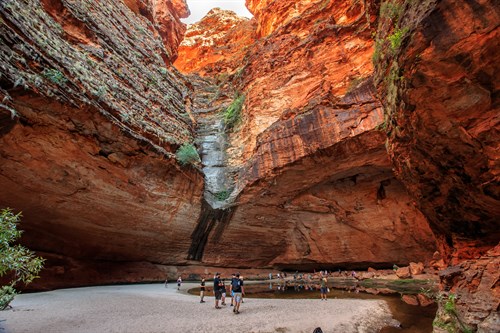 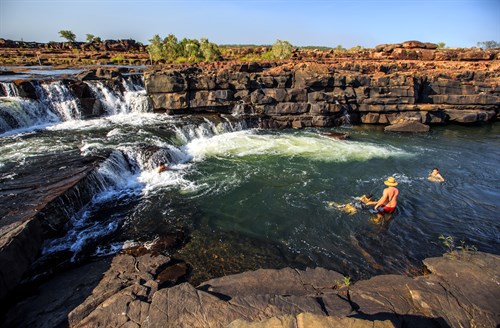 The day of departure finally arrived. I flew out of Melbourne at sparrow’s with my long term travel companion, CTA photographer Ellen Dewar — otherwise known as "Louise" to a handful of our work colleagues who have also dubbed me "Thelma".

We touched down in Alice Springs after flying over the pink salt lakes of the SA outback, collected our Prado Kakadu from TrueTrac Tyres, which had kindly taken delivery of the vehicle and fitted Cooper ST Maxx all terrains to it, and met up with Justin and his spectacularly bearded throng of brothers, friends, wives and children. The wives and children (who were beard-free, luckily) had also just flown in to meet the convoy of boys, which had been on the road for a week.

The boys’ itinerary thus far had delivered them to Alice from the Gold Coast via the Simpson, so our meeting place was a hand car wash where they each diligently chamoised red dust from every crevice of their respective Toyotas. The cars were positively gleaming, and would stay that way for at least two hours before the Tanami dissolved into dirt and corrugations — over a thousand kilometres’ worth, in fact.

It eventually spat us out at Halls Creek, and we were itching to get into the Kimberley and see something other than the flat, featureless landscape of the Tanami Desert. Aside from an atmospheric stop over at Wolfe Creek — where we arrived by night and I spooked myself so badly I made Ellen accompany me and my shovel when nature called — the Tanami offers little in the way of scenery. But it’s the quickest route from Central Australia to the Kimberley, so is commonly endured by foolhardy travellers such as us.

Our first taste of the Kimberley proper was the magnificent Purnululu NP. It was late afternoon when we meandered through her rusted, ancient escarpments and rocky, spinifex-covered hills, the contrasting green and red colour scheme vibrant in the last of the day’s light.

The undulating road, with its numerous creek crossings and views to die for, was a treat, and took us probably four times as long as it should have on account of all the stops Ellen wanted to make for photographs. I was happy to be doing the driving while she snapped away, though, because this was one of the most stunning roads I’d ever driven on — not to mention fun!

The next day we headed to the southern reaches of the park, where one of Australia’s great outback icons awaited our arrival: the Bungle Bungles, the place so beautiful they named it twice. Like Wagga Wagga except, well, beautiful.And there they were, a swarm of giant beehives gathering in clusters across the vast landscape, the result of 20 million years’ worth of erosion. They owe their shape and striking orange and charcoal stripes to cyanobacteria — single cell organisms considered to be one of the oldest forms of life on earth — which comprise the charcoal layers that help stabilise the structures against the elements.

It’s all very picturesque, and certainly worth me carrying 15kg of Ellen’s photography gear on my back in the 35-degree heat for the hour-long walk into Cathedral Gorge, the most accessible of the many bushwalks on offer here. The walk into the heart of this particular apian cluster was stunning, the sandy cave and pool of water at the end the stuff that inspires fairy tales.

FAST FACTS ABOUT THE AREA:

If you don't want to miss out on all the latest news and reviews, why not subscribe to the monthly CTA magazine, see all the details here.