The OPUS OP4 proves style and substance can go hand in hand, without needing to cut corners

When word began to spread several years ago that there was a new camper on the market that had an inflatable tent, I admit to a degree of scepticism, first about the accuracy of the reports, then about the practicality of the idea. I mean, sure, blow up a tube of rubber and you can create a rigid sort of structure, but the notion of sustaining construction with enough durability and strength to support a canvas tent and awning, plus internal lighting or whatever else you might wish to hang from it, and to resist the vagaries of wind and rain — how ridiculous is that concept? 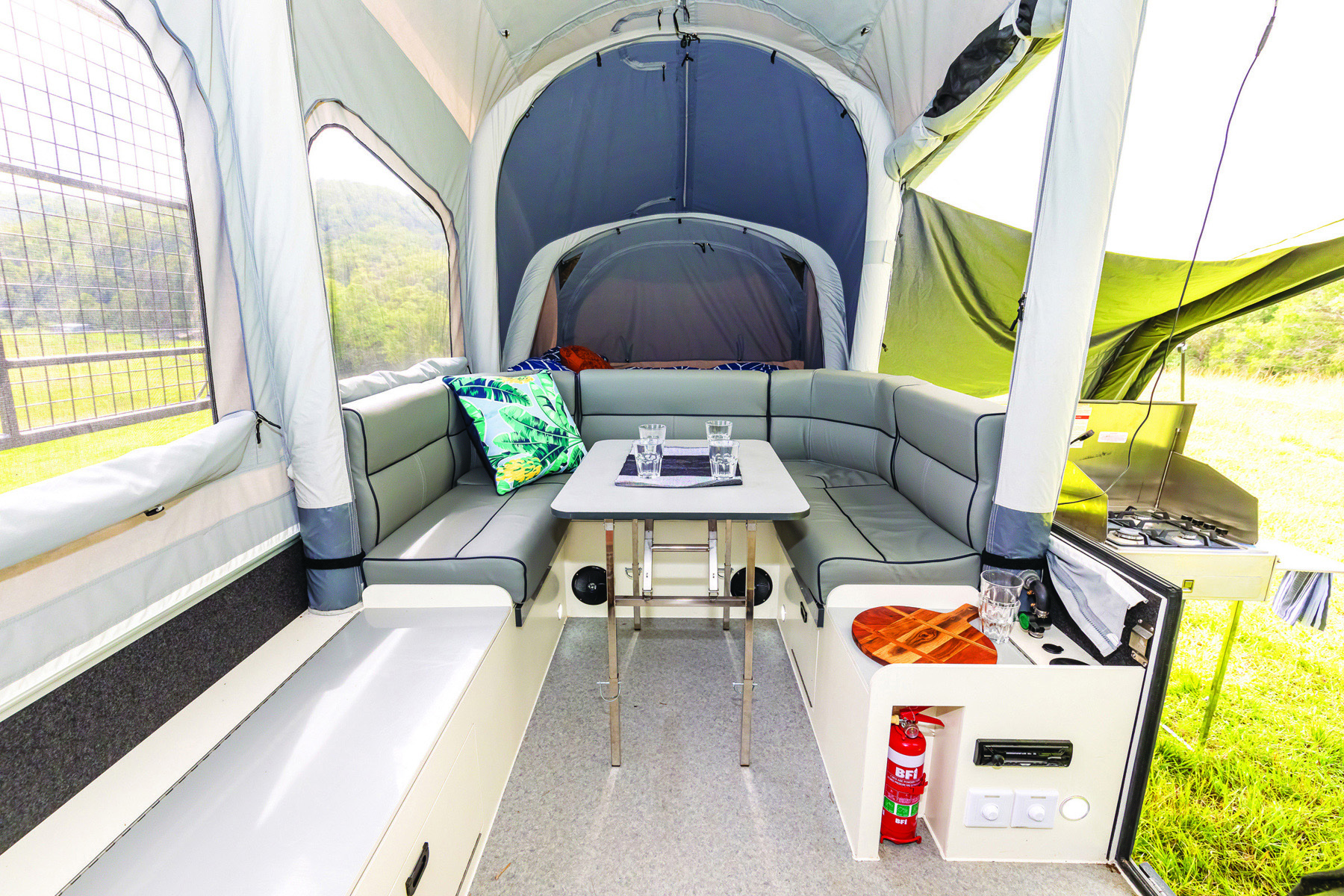 The outside hides a truly unique camper

The Opus line of campers continue to prove they can and will do the job of providing a unique, functional and practical camper trailer whilst doing it all off the back of that profoundly unique inflatable tent structure. The whole system operates at just 7psi, which is never going to be dangerous. It's simply and easily repairable by the least practical person in any group should you ever suffer a puncture or a leak. And it's quick to boot.

The tents come attached to a basic forward-fold or double-fold trailer, and really are a one-handed operation if you have attachment issues to your glass of wine or bottle of beer. Having opened the fold-over roof sections of the camper, it was simply a matter of turning on the air compressor and standing back, occasionally giving the emerging tent a shake to assist in the inflation. Seven minutes after you started it’s finished to the point of the kitchen being out. Finito. If you want the awning up, it’s a couple of minutes more.

Deflating is simply a matter of opening a couple of valves and the whole thing collapses to the ground. Packing away involves no more than picking up the limp tent and its canvas and hoisting it into the camper, with no more particular care than ensuring there’s none sticking out when you come to clamping down the lid. That latter seemed the hardest part of the process as residual air in the tubes seemed reluctant to exit, but it just required a little elbow grease.

Opus Campers boast an absolutely distinctive concept for a camper trailer — an inflatable tent that requires no poles at all. This idea owes its origins to military contexts where you can find inflatable military first aid tents in field and operational environments all over the world. But in the camper industry there’s simply no comparison.

Watching the Opus OP4 being deployed at the CTOTY 21 judging grounds was like witnessing a fairground operator preparing a jumping castle for the onslaught of a hundred squealing children. While your adult camping buddies may be able to restrain themselves slightly better, there’s no doubt that you’ll draw a few ‘oohs’ and ‘ahhs’ when you roll into camp and set this unique camper up.

There’s something remarkably appealing in the sheer simplicity of flicking a switch and seeing your ‘home away from home’ unfold before your eyes. If all you’re deploying is the main tent, you’ll be sorted in under 5 minutes — if you need the awning too, add a couple more minutes and you’re covered. All of this is done with only the merest hint of human intervention. It’s any wonder that the Opus team have made the inflatable tent an indispensable feature of their camper fleet? People have paid money to see contraptions that have had less ‘wow factor’.

Beyond the showground appeal, the Opus OP4 is a competent rig that offers all the features you’d expect from an imported dual fold camper. It is lighter than many competitors, likely due to the aluminium frame with aluminium composite panelling that helps keep the ATM under 1499kg. The layout is logical, the build quality on point, and the finish is clean throughout, although somewhat austere in parts. Inside the internal skylights are a real boon and will see you gazing at the night sky from the comfort of your own bed. What’s not to love about that?

At $31,990 the Opus is not the cheapest camper in its category, but it’s hard to put a price on its camp-side appeal. If you want a conversation starter whenever and wherever you pitch your camp, you’d be hard-pressed to find a camper that’ll will draw the crowds more reliably than an Opus OP4.

The Opus OP4 has the potential to be a decent off-grid camper, however, it is currently missing a few key elements. Water isn’t one of them with a decent holding capacity of 160L in two poly tanks, plumbed separately. The camper also has okay power capabilities with two 100Ah AGM batteries rechargeable via the Projecta 16A AC charger.

This is as good as it gets though. A 50A Anderson plug has been installed to charge the batteries from the tow vehicle, but the assumption is the vehicle has the VSR or DCDC charger installed to properly manage the charge from the alternator. The batteries can also be charged using a regulated solar panel, but they are BYO. There is a provision for two 20L jerry cans and two 9kg LPG bottles, and while the slide-out kitchen has plumbing for cold water, a dedicated hot water unit is optional. Unfortunately, the four-burner stove is more suited to a house than a camper, needing polystyrene to be inserted to prevent the burners from being damaged during travel. The provision for an external shower has been installed, with a water in, water out and LPG gas bayonet at the rear of the camper. This family camper is better suited to caravan park stays, not remote bush camps.

The dual seals on the body of the camper are a good touch, designed to prevent dust and water ingress. The 2-PAC paint baked enamel finish is clean and available in 6 colour options. The 340gsm polycotton canvas was nicely double-stitched with two layers protecting the air pockets, one a toughened fabric, the other polycotton canvas. All the windows contain a midge screen, PVC panel and a canvas panel that can all be zipped or unzipped. ‘Bug blockers’ are used to fill all the gaps between the canvas and the body where the air pockets run, though these seemed like a big afterthought.

The body of the camper is an aluminium frame and composite panel exterior with foam insulation that sits upon a fully galvanised chassis. The welds are neat, as are the wiring and plumbing runs. The OP4 comes with a 5-year warranty on the structure, 3-year warranty on the tent and 12-month warranty on manufacturers items.

Call it the selling point, the unique selling proposition or whatever, but the way the OP4’s tent inflates and its ease of use are what defines Opus’ trailers.

Pop the side latches, hit the button, grab a cold one and enjoy the spectacle. The way the tent inflates in around five minutes draws a crowd and is literally as easy as it sounds, which makes it a bit of a pity it wasn’t quite so easy to pack down. Deflating the tent was as easy as unscrewing a couple of valves but once the canvas is stacked in the centre and the floors folded back to be the roof, getting the latches back on was a real struggle. I tried a few different arrangements of the canvas, checked the positioning of the lounge cushions and made sure the mattress hadn’t moved but pack down was still harder than it should be.

Once set up though, wowser. There are campers with lots of internal space, then there is the OP4. The way the Air Beams inflate into hoops adds to the internal volume and allow the designers to do neat things like incorporate moon-roof windows, great for stargazing.

The mattresses are firm — they need to be as they are fairly thin at less than 100mm thick. A topper would help so long as it still allowed the roof to close. The lounge is a good height; not so low as to have your knees around your chin but not so tall as to make the camper top-heavy. It’s a great balance.

The OP4 rides on Opus’s own design of independent trailing arm suspension though it looks eerily familiar to what you’ll see under the bulk of imported campers. Twin shocks will handle the bumps and it was good to see the limiting straps were made of nylon; chains are too harsh.

The OP4 is a pretty decent performer offroad. A DO35 hitch allows the OP4 to articulate as much as needed and the properly chamfered rear end allows for a lot of rear ground clearance, handy in riverbanks or over steep washouts though its total length and length from the drawbar to the wheels will have you looking carefully at the leading corners in your side mirrors you as you go through drop-offs. I know I did but it felt great behind the slightly lifted Ford Ranger tug.