The inspiration for a Northern Territory sojourn came from a book about John McDouall Stuart, Stuart’s Track. He was the first inland explorer to cross the centre of Australia, top to bottom, filling in the blank spot on the map that was proving somewhat of an embarrassment to the government of the day.

It wasn’t easy. He tried six times, eventually making it through on horseback in 1861. The diminutive Scottish-born surveyor achieved the feat with limited supplies, plotting a zig-zag course — all that the rugged landscape allowed him — learning from local Aboriginals, plants and birds how to find water that bubbled up through natural springs from the Great Artesian Basin.

To put it in perspective, Burke and Wills made a similar crossing to the east, dodging Central Australia. They had one crack at it and unfortunately they never made it back, despite being the best-equipped expedition in Australia’s history. Today, the Stuart Highway (named in his honour) follows largely the same track laid down in 1861. The Overland Telegraph and The Ghan railway also lay in his hoofprints. 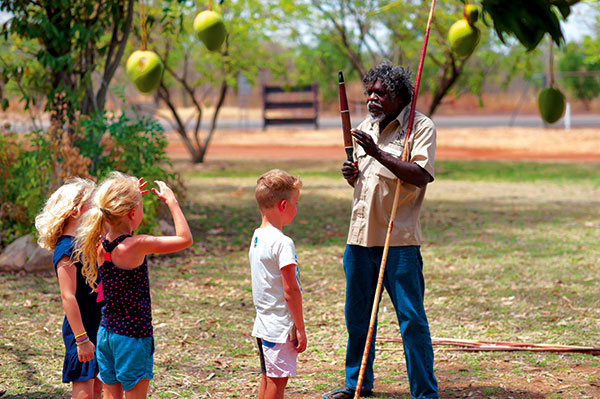 And so our family holiday route is determined. We head north from Port Augusta across to Darwin. Rather than on horseback, we travel in a Toyota 200 Series LandCruiser. We supplement our swags with a camper trailer that has a very comfy bed and a fridge. Stuart would no doubt have laughed at our cavalcade. He travelled light to avoid the complications of a large supply train, but hey, he had a whole lifetime. We had only three weeks before school started!

Our first night is in Coober Pedy – the perfect town for budding explorers. The hotel is carved into an old opal mine, metres underground and the scarred walls shimmer with veins of opal and quartz. The next day we go treasure hunting at the Old Timers Mine and pick up a few trinkets.

The landscape around Coober Pedy is pockmarked with mullock heaps, like a crab colony would engineer on a sand flat. I ponder how many mounds it would take to create a fortune. They eventually dissipate and give way to yet more red and rocky plains, rolling toward a blank horizon in every direction. We’re travelling at 110km/h, covering about 600km per day, but Stuart travelled maybe 30km on a good day, and many days he went backwards to a source of water for his parched horses and crew.

Ayers Rock — Uluru — is our next destination. It’s been almost 30 years since I raced to the top in a pair of Blundstones and explorer socks as a year 10 student. Nowadays, tourists aren’t allowed to traipse the sacred site.

Nevertheless we head out to a viewing point to watch the sun set on the rock. It fills our viewfinders with every shade of ochre before melting into the night. The crowds slip back to the caravan parks and motels, but we linger a little longer and are treated to an amazing lightning storm. The kids are exhilarated and I may have dialled the iPod to Midnight Oil and soaked up some nostalgia. My quest to dodge clichés had hit a welcome hurdle.

In the early years of European settlement, the Aborigines spoke of a place in the centre of Australia called Wingillpinin. It was described as a Garden of Eden, with clean running water, birds of every feather and wildlife bounding freely. If explorers could break through and plot a course to Wingillpinin, it would open up trading routes, pastoral and mining lands — or so they thought.

As Stuart later discovered, there wasn’t a single oasis, but many, much smaller springs and waterholes. Though small, they were large enough to revive Stuart’s horses and crew, time and time again. He wasn’t the only one relying on the springs for survival; Aborigines planned trading routes and campgrounds along these lines.

But as Stuart mapped out the springs, pastoralists quickly occupied the country, turning the natural springs into bog heaps and driving out the Indigenous locals. Stuart had unwittingly contributed to the demise of the inland Aborigine.

The springs are dotted all the way along our trail, most of them are now tourist attractions with easy access. They’re so inviting, we plan our stopovers around them — Katherine Hot Springs and Mataranka are among our favourites.

After soaking in my Speedos, I get back to the mission at hand: to give the kids a genuine Aussie insight. We find it at Top Didj Experience, just out of Katherine.

Our guide, Emmanuel, teaches us the local northern painting technique called rarrk, or 'crosshatch'. It involves painting parallel lines away from the body, using a brush made of grass or hair. In traditional times, ochre would be applied to paperbark, or even people, and the lines symbolised the tribes you belonged to.

Today we’re using acrylic paint on canvas. Emmanuel’s steady hand and true eye create amazing art works — considerably better than my attempt at a fantail stingray! He explains how traditional stories of hunting and the Dreamtime were told through painting, pausing briefly to help the kids correct a shaky hand or wobbly line. The kids paint lotus leaves, yams and goannas in stripes of white, black and brown. Their art works now sit proudly on their bedside tables.

In Darwin we explore some of Australia’s more recent history, the bombing of the city. This story starts on February 19, 1942, when the Japanese Imperial Army bombed Darwin and surrounds. Most Australians would be surprised to hear that more bombs were dropped on Darwin than on Pearl Harbor, the American Naval base in Hawaii.

The story of the bombing of Darwin is thoughtfully told at the Royal Flying Doctor Service Tourist facility, five minutes from the Darwin city centre on Stokes Hill Wharf. The vivid and dynamic display includes life-sized holograms, full-sized Japanese Zero fighter planes, interactive shows, storyboards and amazing virtual reality experiences. The memorial stands as a living memorial for lost souls and a sobering reminder of the horrors of war.

So, what did we learn from our NT adventure? The kids definitely have a closer affinity with wildlife; birds and reptiles, in particular. William is adept at catching lizards and Abbey has become a handy bird spotter. I learned the girls are adept at raark painting, but more importantly, I reckon they will be more accepting of new cultures when they cross paths.

And me? Well, I’m still trying to fathom how anyone could cross this continent without cup holders and air-conditioning. I guess the drive to pioneer new lands is very compelling. Especially for a bloke named John McDouall Stuart in the 1800s.

Check out the full feature in issue #124 of Camper Trailer Australia magazine. Subscribe today for all the latest camper trailer news, reviews and travel inspiration.