Back in the day, your typical camper trailer was pretty basic in design. Sure, they were a step or two up from the old swag, but nothing compared to the luxurious home away from home they’ve evolved into these days.

With all the extras and mod-cons they’ve managed to pack into the modern camper trailer, it’s no surprise the average purchase price has progressed to the next level, too. The good news is, if you’re not keen on spending a fortune on a brand spanking new setup, there are plenty of second-hand units available on the market. Some are good, others are average and then there are the ones to steer well and truly clear of.

With that in mind, we thought we’d run you through a few of the basics around what to look for in a second-hand camper trailer, so you don’t wind up with a dud. 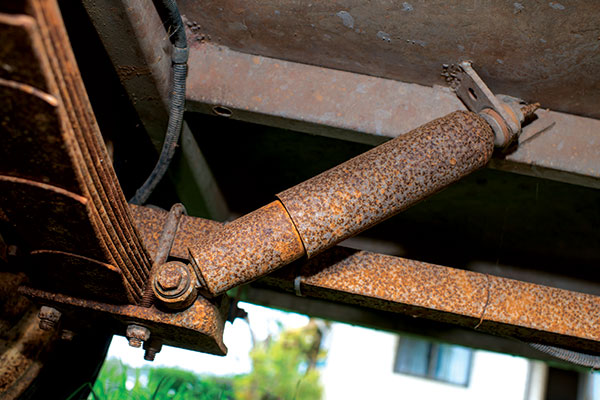 So, if you’ve found a cool camper trailer that could just be the one, here are a few things to check before you pull the trigger on a deal.

Firstly, a quick visual inspection can reveal a lot about a camper when you know what signs to look for. Consider how scratch marks or dents down the side of the body can indicate it has tackled a tight track or two. Or, more importantly, how dodgy repair jobs can be an early warning sign of what’s to come.

Red dirt or dust stuck in tight spots such as door rubbers and exterior trims are tell-tale signs it’s been outback touring at some stage. This would lead me to look closer for damage associated with heavy corrugations such as buggered door hinges or broken mounting brackets for accessories. Check out the condition of the stoneguard while you’re at it, too.

Faded paint usually means the camper has been left out in the elements instead of being covered up, which should have you looking harder for rusty spots and brittle materials including rubber dust seals, elastic cords and canvas covers.

On hybrid models with a solid roof, grab a step ladder and check the roof for deteriorated joint sealant, especially around any vents, hatches or holes for the wiring — this could suggest a leak, which can become quite costly to repair if water damage is allowed to progress.

A good quality canvas tent will provide years of service for the avid camper, providing it’s looked after correctly. Obviously a tent with more rips and patches than a salty sea pirate won’t have much life left in it, but there are a few early warning signs to look out for before it reaches that stage — bird droppings on the roof are one of them! The acidity in the droppings will damage the canvas quite quickly, and things like nuts and seeds from trees can permanently stain the canvas too.

Faded or discoloured canvas can indicate it’s getting a little long in the tooth, which can take a toll on its overall strength, durability and sealing ability. But don’t confuse this with uneven patches of waterproofing additives, which can be a little tricky to identify to the untrained eye.

If there are any patches or repairs made to the canvas, have a good look at their quality. Even ask the question — was it repaired professionally? Will it go the distance? You’ll find the floor on soft floor campers could have little puncture holes if it’s been set up over sharp objects. And check the flyscreens haven’t been damaged either; they have a tendency to get pinched between the tent poles if the windows are left open during pack-up.

Look closely for any abnormalities around the eyelets, and any damage around the zippers' stitching/teeth as these generally have to cope with the most strain when they’re secured and under load.

That leaves us with perhaps the biggest of canvas issues — mould! Yep, this slimy little bugger can be big trouble if left untreated. Dark spots or a green slimy substance are the most common signs of mould and, while it can be treatable, in some cases it’s not always possible. As a rule of thumb, if it looks any further than the initial teething stage, leave it — or be prepared to replace the canvas.

Obviously you want the tyres to be in good roadworthy condition, right? But there are also a few key signs to look out for when it comes to how a tyre has worn. The first of which is to look for uneven wear on one edge of the tyre, which would usually indicate something is out of whack. It could be something as simple as a wheel alignment adjustment, or a more serious problem such as a bent axle. It could indicate the trailer has been overloaded, the springs have sagged or even buggered suspension bushes could be the culprit.

Camper trailers tend to get thrown sideways on rough tracks, which isn’t usually a problem unless they impact on something such as the edge of a rut or tree route. Obviously a tyre with sidewall damage is a good indication it has seen a dusty track or two, and the tyre will almost always need replacing. The question is — was the impact enough to cause any other damage? Often this is not the case, but it begs the question, eh?

Believe it or not, there are actually quite a few things you can check around the kitchen area with minimal effort.

For example, you’ll want to ensure the locking mechanism and slides are working nice and smoothly — they get clogged up with debris after some heavy touring. Don’t be afraid to actually ignite the gas burners either, as the last thing you need is to find out there’s a blockage or the igniter is stuffed on your maiden voyage.

Have a good look at any gas hoses or electrical wiring that runs to a slide-out kitchen — it can get caught up and pinched as it slides in and out. Also, if the gas is permanently plumbed up, make sure there’s a compliance plate — it’s a legal requirement in Australia!

It’s also worth turning the water tap on and checking the colour of the water. While clear water doesn’t necessarily mean it’s safe enough to drink, it’s a much better sign than green or brackish water.

Now, this is a good place to sharpen your inspection skills. Have a close look for any signs of rust, kinks or damage, especially along the chassis. Take a gander at how the suspension seems to be holding up and inspect the shock absorbers for fluid leaks or stone damage which could impair their operation.

Have a look for rust stains around brake components, which could signify any moving parts may be seized up. Make sure water hoses and electrical cabling is all in good condition, and check between the water tanks and bash plate for any stones that might be caught in there, and which may have rubbed a hole through the tank over time.

What you look for on the inside largely depends on the type of camper you’ve got. For hybrid models, pay particular attention to how well the cabinetry is constructed, especially if you’re going offroad. Make sure the compartment doors are all secured properly and the hinges are nice and tight — you don’t want them opening up mid-trip. Look for signs of water and dust entry in the cupboards, along the walls and the ceiling too.

Check out the condition of the mattress while you’re there. Obviously you want to see how comfortable it is, but don’t be afraid to take the sheets off and dig a little deeper. If the tent has been packed away wet at some stage, the mattress may have held the moisture and gone a bit mouldy. Also, look for dark marks on and around the bed frame, which could be a sign of bed bugs or mites.

If any of the tent poles are corroded, make sure it hasn’t spread to the canvas. And check the floor for weak or soft spots while you’re in there.

First things first, check all the lighting is working — that’s inside and out, including mandatory signal lights. Try plugging accessories into the 12V auxiliary outlets while you’re at it. And don’t fall for the old “the battery is just flat” trick either. While it might be true, there’s a good chance the batteries will need replacing if they’ve been run too low, anyway.

Corrugations and bumpy roads can rattle electrical connections loose, which can be the start of corrosion, as well as causing mounting brackets designed for accessories to collapse. So have a good look and make sure you’re happy with the condition of everything.

At the end of the day, a camper trailer doesn’t have to be in absolutely immaculate condition to be labelled an excellent purchase. It can be in average condition, or have a few little things wrong here and there and still be a cracker of a deal.

The main thing is you don’t want to be caught out with a nasty surprise. You want to know what’s wrong and what is required to fix it before you lay down your hard earned cash. If you get it right, you can end up with a cracking good camper trailer for half the price of a new one that will last you years.

Check out the full feature in issue #124 of Camper Trailer Australia magazine. Subscribe today for all the latest camper trailer news, reviews and travel inspiration.