Prehistoric Paddocks of the Palaeozoic

Are you a sucker for history? How about monsters? Big things? Join Scott in the Central West of NSW to see what lies below the surface.

What’s the first thing that comes to mind when we say the word ‘fossils’? Was your first answer dinosaurs? A T-Rex maybe? How about fossil sites?

Many of us have marvelled at the fossil artefacts at Naracoorte in Victoria, as well as at Riversleigh in Queensland, and along the ‘Australian Dinosaur Trail’ near Winton.

There are more fossil sites around you than you might think. For instance, there are fossils literally falling out of the ground in Tassie around Fossil Bay, Fossil Cove and Fossil Bluff, while over here on the mainland, myriad fossil sites reveal a history of life spanning billions of years. 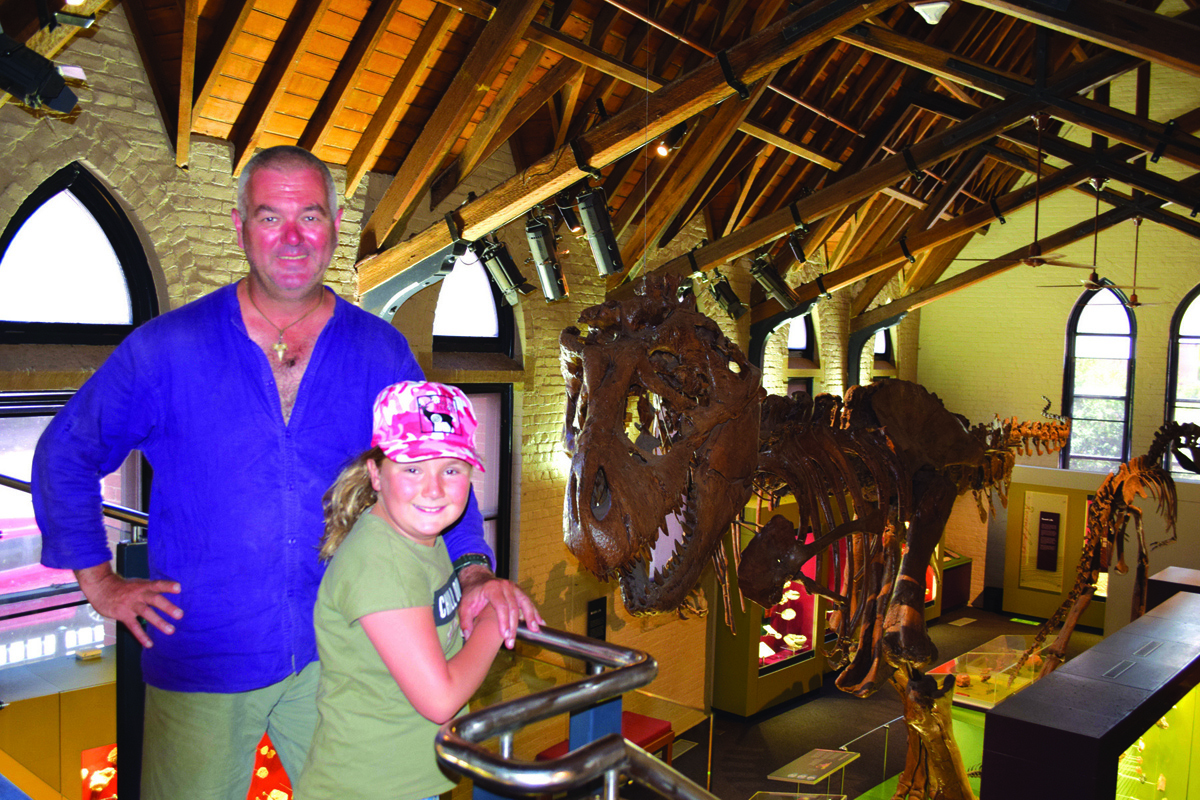 Stop, stay and play at this relaxing holiday park

New South Wales also has a wealth of fossil artefacts waiting to be found. From fossilised fish to mega marsupials, there are treasures in the ground, on the ground and underground.

A SPOT OF FISHING

While dinosaurs the size of a buses have obvious popular appeal, we’d be selling ourselves short to think that’s all there is to it. During road works in 1955–6 around 10km west of Canowindra, NSW, an observant road worker noticed a rock with some funny marks in it. His accidental find went on to reveal the only known fossil fish site of its size and age in the world — truly unique.

The rock slabs that were lifted from the site are now housed in the Age of Fishes museum in the township of Canowindra. Acclaimed as “a world class find” by Sir David Attenborough when he visited in 2013, the sheer magnitude of the fossil relics means that some need to be housed, off-display, in the newly constructed shed adjacent to the museum. They need the extra shed because only one 10th of the collection is on display. When you consider that, at 360 million years old, these fossils are more than five times older than T-Rex, it really puts into perspective how ancient life is in our part of the world.

Getting there is easy. From Sydney, it’s a four-hour drive, or you’ll be there in two and a half hours from Canberra. And if you’re interested in fish with a little more wriggle left in them, the Lachlan River is just down the road, while the Macquarie is a little further north. So, bring your fishing rod and get up close and personal with the fossils’ great, great x Palaeozoic grand kids!

If you’re in this part of the world, head north. A short jump of one and a half hours and you’ll strike the Mitchell Highway on the way to Wellington. Providing organised tours since 1885, thousands of people come here annually to visit the Wellington Caves complex.

The Cathedral Cave has been renowned since the late 1800s for its massive stalagmite. Less well known, perhaps, Wellington Caves is the site of one of the most significant mammal fossil finds in the world.

Discovered in 1830, this was where fossilised Australian mega-fauna were first discovered. These caves contain the largest deposit of Plio-Pleistocene mammal fossils in Australia including the fossilised mega marsupial Diprotodon — that’s the wombat that grew to the size of an SUV. Also found here are the fossilised remains of the Marsupial Lion, Tassie Tiger and other legendary Australian creatures.

And if you need any more convincing about the importance of Wellington Caves, consider that this place is known to have informed Charles Darwin’s theory on the Evolution of Species after he viewed the fossils found here while visiting Australia in the 1830s.

Book ahead and you can visit the Cathedral Cave and/or the Phosphate Mine. While the Cathedral Cave involves negotiating steps, only a medium level fitness is required. The Phosphate Mine, meanwhile, is wheelchair accessible. Here, you’ll see literally thousands of fossil fragments sticking out of the cave walls and hear the interesting back-story to this World War I era mine complex. Both caves remain a comfortable 18 degrees year-round making them a great place to escape on a scorching summer’s day, or a chilly winters day.

The adjacent Wellington Caves Holiday Park offers spacious green lawn sites under the shady trees. Enjoy a cool down in the Park’s pool or a round of golf at the course next door. Then, if you’ve still got the urge to get underground, consider some cave touring with Jenolan, Abercrombie and Wombeyan Caves just back down the road. Or pack up your rig in Wellington and travel two hours further north to Coonabarabran.

Many local Visitor’s Centres take great pride in showcasing the local area’s attractions. Many of them do a great job, but it would take a lot to beat the local Information Centre at Coonabarabran. It will leave you gob-smacked.

While the entrance to the Centre is unassuming once you head into the back room it’s a quite a different story. Here, inside a massive glass display cabinet, you can see one of the finest Diprotodon specimens ever found in eastern Australia.

Discovered in 1979 on private land on the banks of Cox’s River near nearby Tambar Springs, this massive, fossilised skull was once part of the largest known marsupial to have roamed Australia during the last two million years. Although the species is thought to have become extinct as recently as 20,000 years ago (or later), the specimen at Coonabarabran (known as Frank to the locals) has been radiocarbon dated at 33,500 years old.

Coonabarabran itself is a great stepping-off points for some fantastic National Parks, with bushwalking and mountain bike riding options to appeal to all fitness levels. For example, visit the Warrumbungle’s National Park and imagine the megafauna that used to roam this country for thousands of years before human habitation including Aboriginal. Remember, too, to visit Siding Springs Observatory and gaze back into the dawn of time.

Alternatively, head south-east of Coonabarabran and into Coolah Tops National Park. This isolated plateau is well-worth the detour with its waterfalls, walks and wallabies. A stroll through the Park’s cluster of towering ancient grass trees, some of the largest of their kind anywhere in Australia, is like stepping back to pre-historic times.

While most of us know Bathurst for its annual gathering of petrol-heads at Mount Panorama, it’s also home to the Australian Fossil and Mineral Museum. This museum displays over 5000 items with everything from opalised fossils, ‘Elephant bird’ eggs to cast replica T-Rex. There are specimens from every major stage of life on Earth, some literally billions of years in the making.

Of course, you can find fossils behind glass in many other places across this part of the country, from local heritage museums to the dedicated museums of fossils and gemstones. So keep your eyes peeled and your magnifying glasses handy.

Pack for every occasion! We’ve seen snow on Mount Panorama on Christmas day! While Mother Nature can keep us on our toes any day of the week, most of the time regional NSW enjoys weather that’s stable — not to hot and not to cold — and just how Goldilocks likes it.