The Cobourg Peninsula in the Top End tempts travellers with its big fishing catches, untouched environment and curious history.

It might be a local delicacy, but the long bum that we’ve just dug out of the mangrove mud is a hard sell, even after a solid roasting on hot campfire coals. Barramundi it ain’t, but the first-time-camping Victorian gals beside me don’t seem to mind.

They are off, nibbling on their chewy crustaceans with gusto and standing with spears ankle-deep in sticky mud, searching for crabs. In faraway Arnhem Land, our happy band of big city escapees is going decidedly wild, and there are smiles all around.

We’re on a bush tucker tour of sorts, only it’s with Garig Gunak Barlu National Park ranger Robbie Risk and it hasn’t cost us a cent. Robbie’s monthly excursion to Wuwurdi Billabong is an excellent little tag-a-long adventure that explores the mangroves around Caiman Creek. This murky waterway’s very name has us gingerly wading behind Robbie, watching for crocs, spears poised for any sign of those big, fat mud crabs. 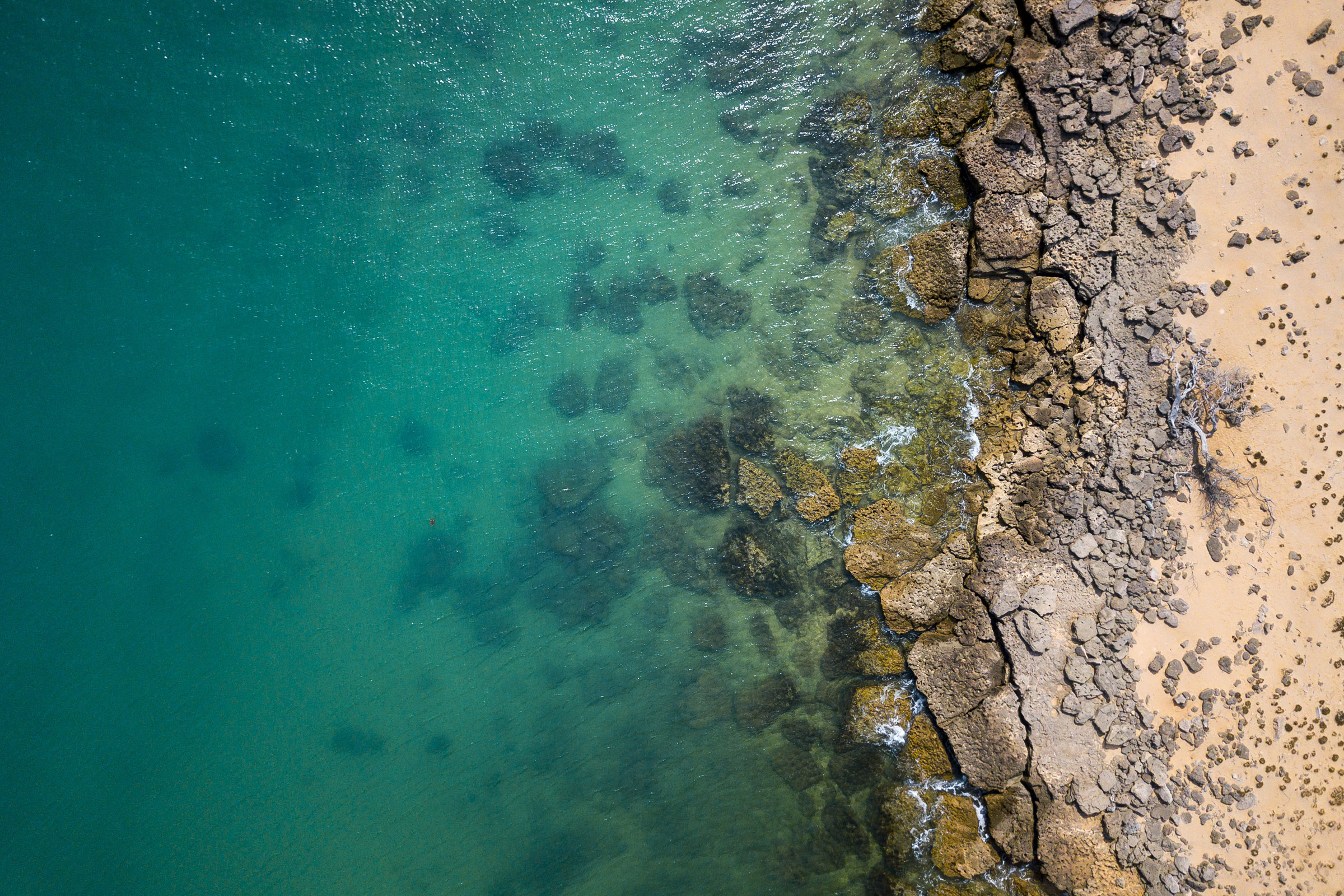 We spot starfish and sea hares that shoot out toxic ink, but unfortunately for all appetites, nobody scores a crab. Instead, we dig around the mud for cockles and pick up unsuspecting long bums from clear tidal pools. Robbie stokes a small campfire and his five-year-old daughter Montana shows everyone how to throw a spear with a woomera.

We all have a go, collecting our wayward spears afterwards from the bush. When the coals are just right – red and aglow – on goes our ‘smoko’. Robbie swears that long bums, especially the blue kind, are excellent tucker, but I suspect this Larrakia man has been living remote for a bit too long. Instead, I steal a morsel of my daughter’s muesli bar and throw a couple of spears.

After such an unexpectedly good morning, I’ve got high hopes for the afternoon’s fishing adventure, boating deep into Port Essington’s voluminous blue bay. Garig Gunak Barlu National Park on the Cobourg Peninsula is something of a pin-up destination for NT anglers: remote, pristine and lapped by ridiculously turquoise waters that reveal all too easily the golden trevally, cod and queenfish you hope to catch.

There are offshore coral reefs and unexpected patches of rainforests, and an extraordinary coastline of steep red cliffs and headlands that stud arcing white sand beaches. The mangroves are full of muddies and there are crocs too – lots of them – making the whole wondrous, sandy scene a ginormous tease to anyone keen to get wet.

The legendary fishing alone would be enough to drag any angler out of Darwin, but the camping is wild too and limited to just 20 vehicles at any time so you’ll feel like you’ve journeyed to the end of the world. There’s an excellent little interpretive centre to explore that unveils the park’s colourful history, and wildlife films are screened here too, made by head ranger Alan Withers and his wife Emma, who greet all visitors to the park.

Angling is what most travellers come to do, and although Alan Withers won’t reveal his favourite, day-off fishing hole, others we meet have had good luck fishing off the beach at Caiman Creek in Berkeley Bay. The park is enormous – 4500 square kilometres – but the vast majority of it is off-limits to visitors so you’ll need to tow in a boat to see the national park at its best.

You can launch your tinny from the sealed ramp at Black Point and fill your week exploring deep bays on either side of the peninsula – from Port Essington all the way south to hike around what’s left of one of Northern Australia’s boldest pioneering settlements, to Vashon Head to the north-west and along the eastern side of the peninsula as far as Stewart Point.

Off the tip of the peninsula we reel in good catches of Spanish mackerel and long tail tuna, while other top catches include barramundi and mangrove jacks snagged in Port Essington’s mangrove-fringed bays. There’s a top Coastal Drive along Cobourg’s east coast and you should catch at least one sunset from Smith Point, where a monument rises from the very tip of the peninsula.

THE TALE THE LAND TELLS

Today, traditional clans of the Iwaidja speaking people live on the peninsula and jointly manage the park, but no such rights were recognised back in 1838 when the British Government built the Victoria Settlement on the land that the Madjunbalmi people called Murrumurrdmulya.

The settlers who sought to claim this utterly faraway coastline braved isolation and malaria, sunken supply ships and cyclones, lasting 11 solid years before what was left of the townsfolk were forced to weigh anchor and flee. The Madjunbalmi people helped to supplement the pioneers’ diet, receiving clothes and tobacco in exchange, but they paid for it with their lives when malaria broke out.

At first sight, the Victoria Settlement’s location couldn’t be more idyllic, set atop high limestone cliffs at Minto Head, overlooking the calmest of bright blue bays, and shaded by a canopy of mop-top cabbage palms and paperbarks. With a rich mangrove river on one side and lovely white sand beaches on the other, it’s some kind of paradise today, but life back then – without regular supplies of food, medicine and bug spray – was extremely challenging and survival, precarious.

In the first year of settlement, a cyclone claimed 10 lives and levelled all buildings. Gardening efforts failed, supply ships arrived weeks and months too late, malaria was rife and few children survived. In all, a quarter of the population lies buried in the cemetery.

We troll a couple of lines as we motor 14 nautical miles deep into Port Essington, but the day is too hot and still to snare a fish, so we hit the trail around the Victoria’s ruins instead. There’s no one else on the water and we find the ruins deserted too, bar the enormous buffalo we spook grazing in the grasslands. It takes off at a sprint, grunting and snorting.

At the ruins, an easy trail loops past the chiselled stone footpads of Victoria’s tiny homes, hospital, stores and kilns, and there are middens from the traditional Madjunbalmi people too. The walking distance is small – just 3.7km – but we manage to spend three hours exploring, unearthing porcelain and glass fragments, before heading back to sea to watch the sun set over the towering limestone cliffs at Adam Head.

An old tamarind tree flourishes by the beach, left by Macassan traders from Indonesian Sulawesi who arrived a hundred years before the British to harvest sea cucumbers and left behind the wild cattle known as banteng that roam the national park today.

An enigma on this tropical, Top End landscape, Cobourg’s banteng represent the world’s largest wild herd, endangered in Indonesia but thriving across Arnhem Land despite annual efforts to cull them. The banteng and buffalos might be outsiders, but the resident turtles sure aren’t. All six species of Australia’s nesting sea turtles come ashore at Cobourg: green, hawksbill, leatherback, flatback, and endangered loggerhead and olive ridley turtles too.

There are dugongs and dwarf spinner dolphins and more estuarine crocodiles than I’ve seen sailing northern Australia. On land, the park protects the very first of 65 Australian wetlands recognised under the Ramsar convention as being of international importance. That means birders will be in heaven.

COULD THIS BE YOUR NEXT ADVENTURE?

Suffice to say there is plenty to do. Even getting to Garig is an adventure in itself. The all-day off-roading takes seven hours from Darwin, navigating a skinny, corrugated track with blind corners and enough river crossings to cool your tyres.

There are no supplies available once you leave Jabiru on the edge of Kakadu National Park, so you’ll need to stock up on fuel, food and fishing lures.

And you’ll need to work with the tides to get across the East Alligator River via Cahills Crossing, where crocs love to wander. Low tide at Cahills is about six hours after Darwin, and once you cross, it takes another three or four hours to reach the Black Point ranger station, 275km away.

Garig Gunak Barlu National Park is located 560km north-east of Darwin (allow seven hours). The park is 4WD-only, and opens only during the dry season months (May to October). There is no fuel available in the park so top up at Jabiru in Kakadu National Park before continuing across Cahills Crossing on the East Alligator River. Low tide here is around six hours after low tide in Darwin. From Cahills, it’s a three to four hour drive to Cobourg’s Black Point Ranger Station (275km). Expect corrugations on this narrow, dusty road and slow down on blind corners to avoid collisions.

Camper trailers and boat trailers are permitted in the park, but caravans and motorbikes are not. You can carry alcohol as long as you don’t drink it en route. There is very limited mobile signal on the peninsula, so don’t count on getting more than a text message off.

Permits for week-long stays in Garig Gunak Barlu National Park might seem pricey at $232.10 but they cover camping for everyone in your vehicle (up to five adults, kids are free). Apply well in advance for peak or school holiday stays. You can download your permit application and submit via email (pwpermits@nt.gov.au), mail (GPO Box 1448, Darwin, NT, 0801) or fax (08 8999 4525).

Two camping areas (one for generator use) provide solar hot water showers, toilets, bore water, firepits and tables (no pets). There is a boat ramp, an interpretive centre with weekly film screenings and a highly recommended bush tucker walk takes places once a month.

Garig Gunak Barlu is absolutely off-limits to swimming. All the croc slides on the beautiful beaches will tell you why.

Phone Black Point Ranger Station for road conditions before setting out (08) 8979 0244 and head to nt.gov.au  to download a park guide and permit applications.