The Burden family are off to the south-west of WA, continuing their Big Lap in hot pursuit of the real Australia.

Part of Australia that is often overlooked or missed completely is the south-west of our largest state, Western Australia. Having explored the Nullarbor on our latest adventure, this undersung destination was the next on my family’s travel list, and for good reason. Stunning white beaches west of Esperance, lush bushlands, and thriving forests – how could you skip this? 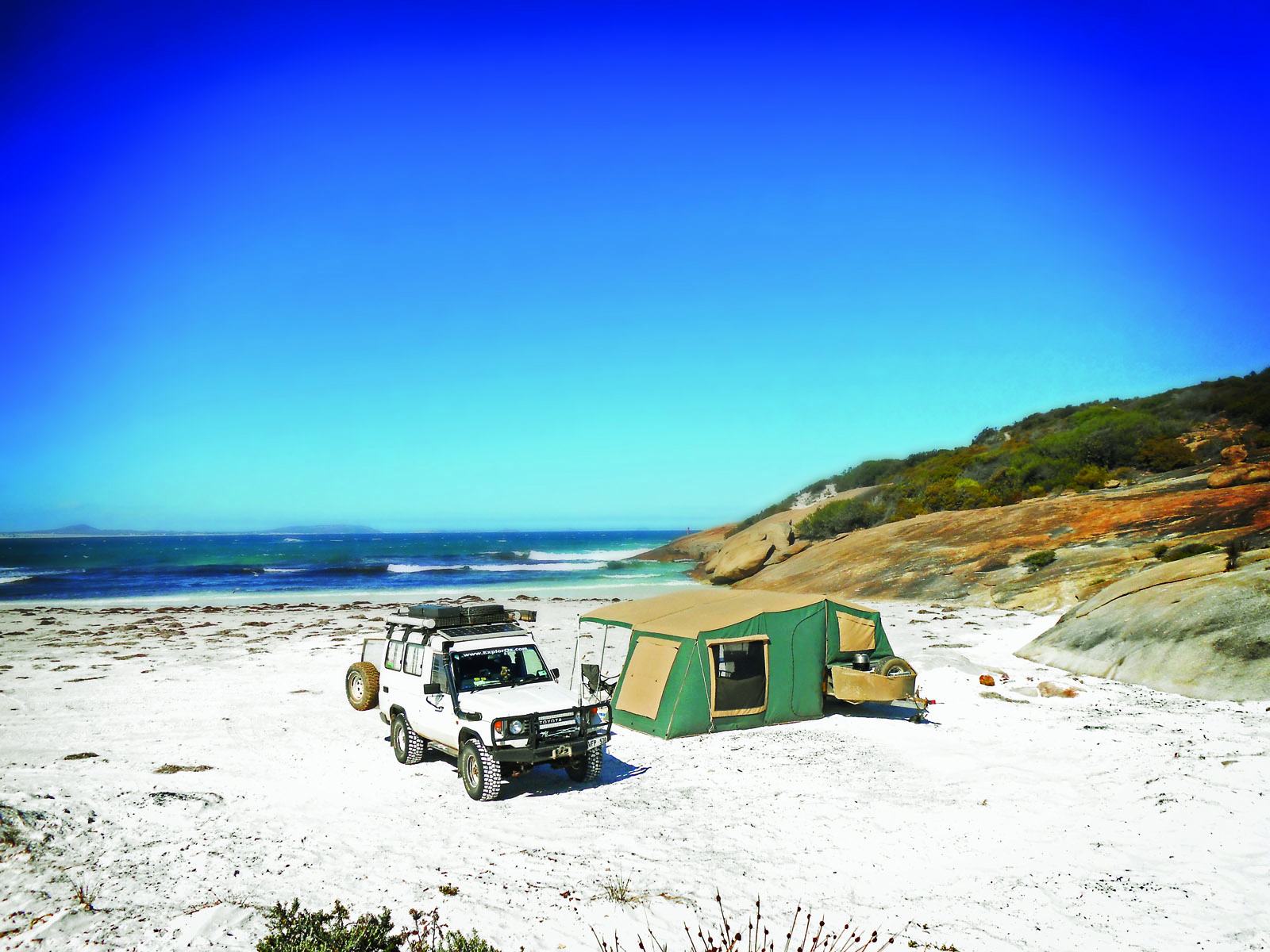 Pitched just beyond the high tide mark at Dunn Rocks

After we wrapped up our last journey at Israelite Bay, we continued to follow the coastline around and really take in this sensational part of the country. First on our list was the last stretch of Cape Arid National Park. Here, we set up the camper at a spot called Thomas River, which is hidden away and has everything you could think of: barbecues, toilets, a fantastic beach complete with bushwalks and rock fishing, and, of course, the Thomas River itself, which is fantastic to kayak along and enjoy the serenity.

Wharton Beach, our next destination, was one of my family’s favourites. We could have happily spent a few weeks here! Camping at Duke of Orleans Bay Caravan Park gave us a chance for a hot shower and a place to do some washing. You can drive on Wharton Beach and the sand is usually quite hard-packed, but keep some recovery gear handy just in case. With clear waters, white sands and gentle rolling waves, this place is ideal for all ages.

Just around the corner from Wharton Beach is another beach called Dunn Rocks, which is a bit of a local’s secret. A free campsite and away from the crowds, this is the ideal spot to relax and set up camp for a few nights, with no shortage of beach on which to pitch. We chose a spot right next to some rocks, which provided us with shelter but also gave us youngsters something to do: exploring to find little critters.

Having followed the coast along from Dunn Rocks, we found a sensational campsite at Cape Riche, right by the water’s edge. Cape Riche was definitely a place we’ll remember. We experienced a huge salmon run on the beach, which had the whole campground down fishing and picking up fish by hand straight out of the water. Cape Riche is a fantastic spot to base your camp and then shoot off for the day to explore other areas, which is exactly what we did!

Further to the west, we came upon Albany. A major attraction to take a look at here is the historic whaling station. Our family absolutely loves investigating the history of Australia, so it was fascinating to see the old whaling boats, the slaughter floors and skeletons of different species of whales.

Something a bit whacky that you don’t see every day is a natural bridge, so we went to have a gander. The Natural Bridge, in the Torndirrup National Park just out of Albany, is a large rock formation caused by gradual erosion over the years. Right next to this beauty is a gigantic channel in the rock called The Gap; with a 25 metre drop down to the water, it’s quite a sight to see.

A short walk from the Natural Bridge and The Gap, you find some pretty specky blowholes. Get your timing right with the tide and you’ll be in for a huge surprise, with water spouting up from holes in the rocks. It’s something that you won’t forget any time soon. You could spend a few hours just sitting there and watching the water.

Deciding that it was time to explore the south-west further, we packed up camp and headed north up into the Stirling Range National Park and had our first real taste of mountains. In South Australia, where we’re from, there aren’t really a lot of mountains, which made the Stirling Ranges that little bit more special. We trekked along a few of the bushwalks to uncover all the nooks and crannies.

After a full day exploring it was time for us to find a spot to set up the camper. We came upon the lesser known Lake Poorrarecup, which has ideal flat ground for pitching the tent and cooking up a feed for the night. You can camp on the flats of the lake when there’s not too much water in it, or up on the banks; both are fantastic. Our whole family enjoyed the stroll around the water’s edge, pointing out wildlife and things that we found interesting.

Next we ducked back down south to reunite with the coast, at the slightly better known spots of Elephant Rocks and Greens Pool, which sit within walking distance of each other on the Rainbow Coast. In the warmer months, both are popular for snorkelling in the clear turquoise waters. You might even get fooled with your snorkelling mask on, because the the Elephant Rocks really do resemble a herd of elephants from behind.

Further on to the west, we took on the Valley of the Giants Tree Top Walk, something we might not ever get to experience again. Being 75 metres above ground level amongst the tree tops is really something special. The metal framework tends to move a bit, but this just adds to the experience. You can see for miles, while also being able to see directly below yourself. As you might have gathered, this isn’t a place for those who are scared of heights!

Inevitably, breakdowns happen on long distance trips. A pair of U-bolts snapped on us. Luckily Dad is a gun at bush mechanics, so we were limping to Quinninup, the closest town, in no time. From there, it was just a short drive off to Manjimup to get parts for the camper trailer. We made the caravan park at Quinninup our base camp for about a week, and in our downtime we roamed through this sleepy little town, taking in its woodwork shop, information centre and small old log houses.

From this base camp, we travelled out to take a look at the infamous Moons Crossing Road, which can be quite tricky to navigate when the water is flowing. You really couldn’t travel a lot of these places without a 4WD, and we’re so glad we’ve got a reliable one to do so with.

We also dropped by the Gloucester Tree. The fire lookout platform and ladder were added to it in 1947 and the tree is still occasionally used as a fire tower. However, it’s become more of a tourist attraction, but it’s still worth the climb up to the top. The views up there are just sensational and no photograph could ever capture that moment.

After we fixed the trailer we were back on the road. We continued west through the forest, exploring as we went, taking the back roads in favour of the boring old main roads. Our next stop was the Yeagarup Sand Dunes in the D’Entrecasteaux National Park, truly a bucket list place for 4WDers. With millions of tracks and small hidden pockets of campsites, you could have a field day up here! Warren Beach is just as fantastic as the dunes and it’s one of the best salmon fishing spots, very popular when the salmon are running. The mouth of the Warren River comes out further down the beach and while it is crossable, it has claimed many a 4WD in the past, so make sure you are prepared if you decide to take the plunge.

Our next spot was the humble Scott River, where we stayed with a family friend on their property. After a quick drop off of the trailer, we were out feeding our addiction for exploring again. You could easily get lost out this way without up-to-date maps or a GPS; thankfully we had both. We checked out Jewel Cave, and although you have to pay for a tour, it was worth the coin. Surprisingly there were relics of Tasmanian Devils and Tassie Tigers down there, as well as your more traditional cave fare of crystals, stalactites and stalagmites. It can get pretty chilly down below; bring a jacket!

Having explored the cave for a good half a day it was time to head back and set up camp properly. We had a fantastic grassy spot right beside a dry creek bed. We were going to see a bit more family soon, and there was so much more to explore in the region, so we arranged the full set up, with all awnings, tables and chairs out. Being an old trailer and with the south-west rains, our poor old tent had lost its waterproofing, so we placed a huge tarp over the top of the lot; that sorted it out.

Scott River itself is an absolutely fantastic place. We would have happily have pitched the camper and lived here for good, among the flowing rivers and creeks, the abundance of greenery (which we don’t get a lot of in South Australia) and ample wildlife. We had a wonderful time relaxing at camp, cooking up a storm in the camp ovens and nursing the camp fire when the south-west rains came bucketing down.

We also checked out the Cape Leeuwin Water Wheel, on the back of a hearty recommendation. Although it doesn’t turn anymore, water still flows through the trough and out to sea. The wheel used to supply the builders of the lighthouse with the water needed for construction and it also happens to be a nice spot for lunch on a clear day.

Our journey never stops, so off to Augusta we went. This place can get really cold during winter, but it’s right next to the Hardy Inlet which has some good fishing if you’re on a tinny or small boat. We were now exploring with some locals from the area, who showed us a small track right down to the coast around Flinders Bay. We wet a line at this hidden local gem and braved the howling winds, successfully catching dinner for the night and having a blast with a part of the family we hadn’t seen in a good decade, and with our new friends who’d shown us this wild beach.

FROM BEACH TO BUSH AND BACK AGAIN

I hope my family’s experience proves that the south-west of Western Australia isn’t just a region to drive past on your way to bigger and better things. You’ve got to stop by and spend a month or two down here.

Of course, the company you’re in is mighty important. It wouldn’t have been near as special if we weren’t doing this together. Those moments spent smiling and laughing are best shared with others, and who better than family?

So gather the troops for the trip of a lifetime down to the south-west of WA. You won’t regret it.